Activity stream for Jakob Schubert, configured from their own events. Events include ticks, updates and discussions.

Jakob Schubert flashed a route and ticked a route at Foroglio. • 4605 • 4 days ago

Jakob Schubert edited some routes at Foroglio. • 40 • 4 days ago

Created the route 8B+ ★★★ Squalo Bianco.

Created the route 8A Atlantide.

not sure if actually 8b+, could be 8b since it's mostly tricky..One of the best in Bavona for me, so fun!!

World's first 8c! In 2002, Dave Graham repeated it by finding a different solution. He used a heel-hook to make the brutal start sequence easier, and downgraded the problem to easy 8b+. Most of the following repeaters, including Adam Ondra, Chris Sharma, and Daniel Woods adopted Graham's solution and agreed with him about the grade.

Jakob Schubert logged 4 ascents from the past at Otiñar. • discussed 11 weeks ago

Kai started this discussion 11 weeks ago.

Jakob Schubert logged an ascent from the past at Wilder Kaiser. • 3828 • 13 weeks ago

Originally the route was graded 8c+ by first ascentionist Alex Huber but the right hand hold he used on the crux move is basically gone and Adam Ondra found a new beta using a left hand tiny crimp to do the second ascent. I found a way better solution using a good side pull just left of Adam‘s crimp which lets me go directly to the finishing jug. Since this route is pretty much easy except this only move, the whole thing is much easier with my beta now, probably around 8b 😅 It climbs very nicely this way though so I definitely recommend it to people (>170cm) 😉

2nd Ascent after Roland Hemetzberger. shares the crux of 'The Void' but climbs a harder start into it. Since you have such an amazing knee bar in the middle it doesn't make it much harder though, in my opinion.

Really struggled with the crux move at the top at first but with good skin it went down first try today. Really hard to grade since it's mostly about this one single move, could be 9a could be easier for someone who loves pockets I don't know. 2nd Ascent after Roli I think..

Jakob Schubert first ascent of a route and ticked 4 routes at Magic Wood. • 4834 • 3 months ago

Such a good one!! Prime conditions in Magic Wood!

Wow so psyched to add this kingline! You basically do the hardest part of the original force tranquill and then instead of matching the crimp and going out right you do another big move straight up to a pocket from there you do a rather scary top out. It’s definitely harder than the original line but I like the style a lot so personally I would say it‘s not enough to push it up a full grade. It‘s the logical exit and climbs very well so I would love to see some repititions and hear their opinion 😉 Video online! https://youtu.be/Dr82TsVOEXk

Jakob Schubert edited an area and some routes at Magic Wood. • 180 • 3 months ago

Top out to bizarre ride

Created the route 8A ★★ Holy Limit.

Ulfi uploaded a photo at Magic Wood and mentioned Michael Piccolruaz and Jakob Schubert. • 20 • 3 months ago 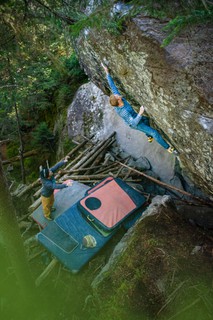 Jakob Schubert flashed a route and red pointed 4 routes at Achleiten. • 4297 • 3 months ago

2nd Go, might be on the soft side. What a line though!!

I think this was the first ascent after a big hold broke, it‘s an amazing power endurance route and now even more so. Think it is quite a bit harder now, maybe 8c/8c+ before and harder 8c+ now. Loved this climb!!

Thanks to misha for the perfect beta! Pretty hard for 8b

Jakob Schubert updated a route at Achleiten. • 40 • 3 months ago

bouldery and hard to onsight haha

3rd Go. cool line but had to clean most of the holds again, doesn't seem to get much traffic

2nd Go. Messed up the starting boulder which is pretty reachy, 8b+/8c but probably more 8b+

2nd Go after checking it out once 2 weeks ago. Hard to grade since it‘s just a really long climb with many rests and no crazy crux. Could be 8c+ I think or at least 8c+/9a 🤔

Cool connection of St. Anger and Zauberfee basically connecting both hard parts making it 8c+ into 8c+ with a crazy feet first knee bar rest in between. Had some trouble with wet holds but somehow pulled through. Definitely a hard 9a maybe 9a/9a+ is fair not sure.

Sick day! First sending Beginning in Eremo then onsighting this and doing another 8b+/8c first go

Cool new start into Riflessi del Rosso, definitely the harder brother so 8b+/8c should be appropriate. It was basically a flash but I did Riflessi a couple years ago.

Checked it out a cuple of weeks ago and send it 2nd go today, somehow felt much stronger even in the sun. Psyched!

Created the route 8b+ ★★ Zero Tolleranza.

8a The Walking Death Sport

Could be 8b+, hard to grade after an onsight but felt really soft compared to the other 8c‘s

Jakob Schubert created a route at Narango. • 15 • 4 months ago

3rd ascent of this cool line in the upper sector. Took me 4 tries to send it. Thanks for the good times Guido!

Kai started this discussion 4 months ago.

After a relaxed breakfast at my girlfriend’s parents place, we drove to Schleierwasserfall and I warmed up with a 7c route. My buddy Mischa Piccolruaz tried the route Lichtjahre and so I was able to watch him closely and get a good impression of the route.

I was psyched to give it a go as well and after Mischa convinced me I should even try to flash it, I warmed up at the fingerboard and went through the route mentally before I attempted it. The route went really well, I loved the style and I felt on top of my game so I could flash it pretty solidly.

It always takes two, though, to achieve a flash: someone who does the work and checks out the route and then is able to talk you through. It was Mischa who gave me such great support, thanks buddy!

Lichtjahre is located in the grey sector of the Schleierwasserfall, where the routes are slightly shorter (about 20m), it's one of the best routes of the crag and I can only recommend it

Right next to it there are a couple routes that I already knew, as for example Mercy Street which is pretty similar in style so I knew what to expect. A lot of sharp holds and quite difficult from the start. Some bouldery sections with long and powerful moves but good holds. Closer to the end you need to keep it together as it’s all about endurance.

One of the trickier parts was where a big foot hold had broken away a few months ago. Many say the route got a lot harder since then. Even before it was a hard 8c, so it’s absolutely fair for Alex Megos to say it’s an 8c+ now. After flashing something it's always hard to grade it but I think 8c+ could be right, although it didn't feel much harder than Mercy Street for me, so one could argue it's still 8c, we will see what other people will say

Due to my biceps tendon injury I had to adapt my training. Rock climbing proved great for my recovery, so I climbed a lot recently, improved my endurance and that’s why I feel super comfortable on the rocks these days. Psyche for more!

Ulfi started this discussion 4 months ago.

Wow such an amazing one!! thanks for the beta and showing us this line Heiko!!

Jakob Schubert edited an area and a route at Secret Crag. • 50 • 4 months ago

Jakob Schubert updated an area at Austria. • 4 months ago

Ulfi uploaded a photo at Wilder Kaiser and mentioned Jakob Schubert. • 20 • 4 months ago 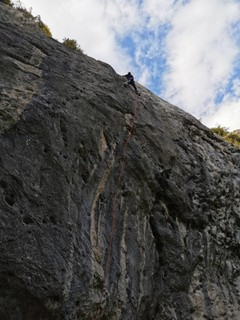 Jakob Schubert onsighted a route and climbed 2 other routes at Valle del Sarca. • 4237 • 4 months ago

2nd Go, 8c+ is more appropriate than 9a in my opinion

Battle with the heat! Not the sickest of lines but climbs so well!

Jakob Schubert logged an ascent from the past at Nösslach. • 3828 • 7 months ago

2nd Ascent. In memory of my friend Hansjörg Auer