Please note that we use cookies to improve the use of this website. By continuing to browse the site, you accept theCrag Site Usage Policy I Agree
Australia
New South Wales and ACTNSW & ACT
Australian Capital Territory
Canberra
Black Mountain Bouldering

Black mountain consists of the same type of rock found around Kambah and Mount Coree. Like Coree, it is less polished than the river crags; unfortunately it is also somewhat prone to breaking just like the other areas. Like Coree, the rock also has good friction.

The boulders of black mountain (or, more accurately, exposed rock faces indigenous to the mountain, as opposed to free standing boulders) are found in a rough ring of the area. While many have visited this area over time, no details have been recorded, other than a brief mention in the local guide of 'black mountain bumdrags'.

The rock here lends itself to many hand and foot-holds, and therefore the climbing is really as hard or as easy as you make it. There is enough simple stuff to make it a great intro to bouldering for beginners who haven't made it outside the gym yet. Though there are also enough crimps, slopes and dynoes around to provide climbing roughly up to V5, including a roof problem or two!

If you're looking for 'that' stellar line that climbs a line of barely possible features, there's a fair few better areas around, particularly Cantaloupe Hill (Corin bouldering) and Black Range.

However, if you're not climbing V8+, or you'd just like a pleasant afternoon out in the sun (which the mountain gets until late, as long as you're on the face near the carpark), black mountain is worth a day trip. Heck, bring a picnic along.

Note that the names and grades of what is here are liable to change for a while until they get solidified. Also you should take them as only being a general idea of the difficulty of the climb, as body morphic issues will become more apparent on eliminates/dynoes etc.

The approach to black mountain is near the Australian National University. Turn off just before the Botanic Gardens into Black Mountain Drive and you'll wend your way up a twisty hill (a nice ride, by the way). Park your car or bike in the first parking area on your left as you go up the hill. Follow the "Lakeview" trail from the carpark for about 120m. You'll need to turn right off the track to find the rocks - a broken band of exposed stone up to 5 metres tall.

If you're staying in or near the city, this is a good little quick jaunt. Otherwise, there's probably other areas that will take your interest, particularly if you're staying in the south of Canberra and have access to Booroomba Rocks and Orroral Ridge.

This area has been climbed at for many years, but the prevailing trad ethic ("if it's got a runner, it's not bold!!") and resulting disdain for any type of bouldering - particularly bouldering that focuses more on eliminates and/or traversing moves - has meant the problems have remained unrecorded until now. 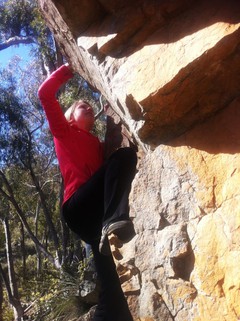 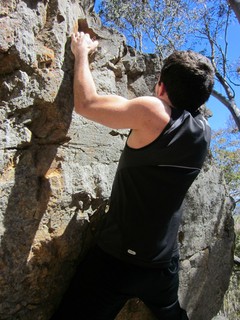 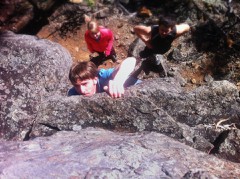 Check out what is happening in Black Mountain Bouldering.