Please note that we use cookies to improve the use of this website. By continuing to browse the site, you accept theCrag Site Usage Policy I Agree
Australia
QueenslandQld
North
Cairns
Captain Cook Highway

Climbing along the stretch of highway between Cairns and Port Douglas

A mecca for bouldering north of Cairns. Beautiful camping on the beach or rocks. Beautiful rocks to match, of all features and types. Some smooth, some gritty, all perfect granite and great sandstone. A truly pristine part of the Far North.

Highballs through to low traverses, steep face climbing, slabby technical challenges and cracks for jamming it really is an amazing area. An 8km coastal stretch completely filled with Boulders, many still waiting to be found, scrubbed and sent!

It's a hard to beat location for an afternoon, often shaded by the mountains behind the beach, right on the waters edge and a fairly steady breeze often, great sunsets are common too for those with a keen eye for photos.

Best to check out the tides before visiting, most spots can be climbed at high tide but it does limit many options, the areas best during high tide are up on the hills of 'Grey And Balding' or the middle section of 'Below And Beyond' being shielded from the waves.

Note; Technically the highway does extend beyond to Mossman area but this guide has been kept to this coastal area for simplicity.

Most crags are within public land boundaries, though some do come close to private land, respect this and stay outside private property borders and do your best to avoid upsetting landowners.

Drive north out of Cairns navigating towards Port Douglas, this will inevitably place you on the Captain Cook Highway. Many of the crags are along this stretch. See individual crag approaches for detailed information

Local accommodation is available in several places, along with places to buy food and supplies. You can camp on the beach but if you are DO NOT SWIM as CROCODILES and MARINE STINGERS may be present annually. Be mindful even camping directly on the sand. This is potentially extremely hazardous so it is not recommended.

Clean up wherever you go, take your rubbish, or any you find out with you. So many of these areas are absolutely pristine and we should all make an effort to keep it that way.

Clean and brush but don't destroy vegetation. Avoid steel wire brushes if possible, a good majority of the rock in Cairns will disintegrate using one of these.

Tick marks - These are ok, but no gross foot long monstrosities left all over the rock, keep them small, and brush them off and your holds when you leave.

Chipping and modifying holds to make it easier for yourself is completely out, either don't do the route, or get stronger.

No squeeze jobs - putting up a line every 30cms along a wall is pointless and creates crowding, if you're on a line and you can put your hands on the route beside it then it's too close.

GEOTAGGING - PLEASE GEOTAG! For any route you create, or know is hard to find add in the Lat and Long in the route details so it shows on the map. Finding routes in the jungle is hard enough without this, with several sectors around being drawn by guesswork and not actually anywhere near the routes they hold. If you are adding in these details take a photo of the route, and then stand at the very base of it using your GPS or phone and record those numbers, don't guess using google satellite!

Don't put route beta in descriptions, for the people who enjoy the attempt of an onsight or a flash it ruins it for them. Keep route descriptions straightforward and let people work it out for themselves.

Cameron Wycherley was one of the first to really develop a lot of this area, with some problems added by Jared Tyerman in key places. A revival was pushed by Nick Murphy in 2020 as nearly 100 new routes were added in a few short months. 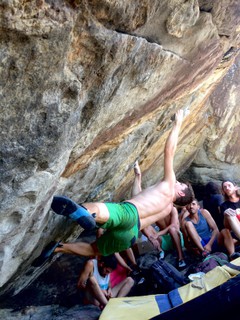 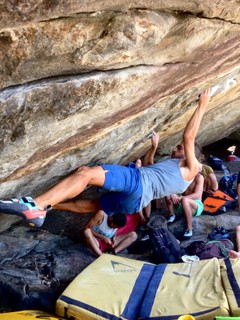 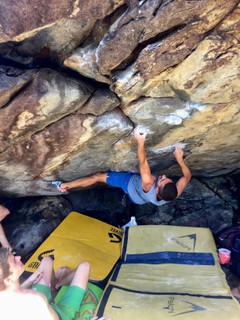 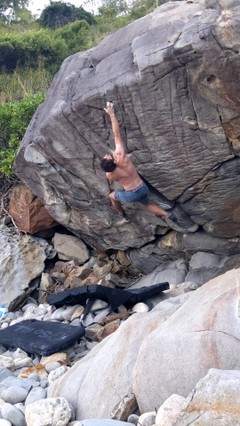 Check out what is happening in Captain Cook Highway.