Please note that we use cookies to improve the use of this website. By continuing to browse the site, you accept theCrag Site Usage Policy I Agree
Australia
Western AustraliaWA
Perth
Churchman's Brook

Churchman's Brook is the most popular climbing location in the 'Perth' region. On any weekend, many individual climbers and would-be climbers can be found there, all vying for a piece of the cliff. The area is well developed in terms of established routes. These range from beginner to hardman climbs, with the majority around the grades 14 to 21.

Churchman's is located east of Armadale in bushland that overlooks the Roleystone Valley. 'Access' is via a well-used dirt track off Soldiers Road, just before it heads downhill going east. The cliff is in two parts - to the west is a small beginners' slope, to the east is the main climbing area

The discovery of the Churchman's Brook cliffs in December 1975 by 'Mac' McArthur was a milestone for the sport of climbing in 'Western Australia'. Up until then, the only metro climbing areas were the quarries and several small cliffs in the Wungong Dam area. 'Mac' had known of the cliff for several years, but his furniture business had kept him from exploring it. When his busy schedule allowed, it only took half an hour of walking from Soldiers Road to locate the cliffs. Today's trails had not been formed at that time, and there was an abundance of vegetation at the base and top of the cliff. Mac was not the first visitor to the area, it is rumoured that local legend, bushranger Moondyne Joe, had a hideout in the cave near the descent gully

After the initial discovery, Mac led a group consisting of Mike Smith, David James and Richard Rathbone on the first CAWA look at the cliff. This group were responsible for most of the early routes. After a quick reconnoitre, all started up different routes in the centre of the cliff. These first climbs were slow affairs and saw several false starts because every handhold bigger than a thumbnail was covered in vegetation and dirt. Smith eventually led the first route, called 'The Sting' (14). The crux on this route was complicated by a hornets' nest which was not found until too late. Next to be stung was Dave James, while putting up the The Bite (16). 'The Fang' (16) by Mac followed

Climbs went up at regular intervals until the early 1980s, when CAWA went into a bit of a decline. During this period, a small but dedicated group including Ron Master, Warren Lees, Wayne Carroll, Mark Gommers and Mark Paramore, as well as some of the earlier climbers, continued to develop the cliff. Alex Oslow put up the classic Super Slab, a fine fingery 21 protected with the first bolt on the cliff. Paramore was responsible for the desperate Gates Of 'Mordor' (20R). Local climber Warren Lees freed the then hardest climb in WA, Up For Grabs (22) which is a brutal climb best attempted only after a long dry period

Follow your road map to the junction of Albany Hwy and South Western Hwy in Armadale. From here take the Albany Hwy for 200m east and then turn L on Carradine Rd. After 1km turn L on Canns Rd and after a further 3km turn L onto Churchman Brook Rd. Follow this for 1km past a large paddock. The turnoff to the crag is a dirt road on the L, which has a triangular double entrance. After 500m park at a large cleared area before the gate (leave it clear). Leave nothing in the car, as break-ins have recently become common, in step with urban development in the area.

Follow a dirt road downhill on the right side of the fence for 50m, and then descend steeply to the right along many steps until reaching the east end of the crag. CAWA volunteers put in these steps and the ringbolts at the top of the crag. We hope that these actions will reduce erosion, increase your enjoyment, and encourage you to support CAWA.

Due to the large amount of small pebbles at the top, it is recommended that belayers wear a helmet here. Of course leaders are best served by wearing a helmet too - for example upside down falls onto this blocky cliff can be quite hazardous.

In summer, even early mornings can be very hot here, but from mid-afternoon on the cliff is shaded. Commercial abseiling is forbidden here.

Facing the cliff, the routes are described from L to right. 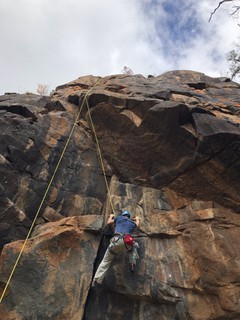 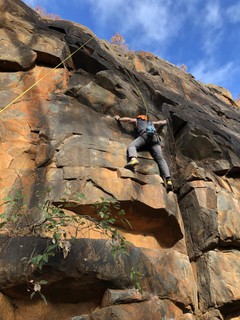 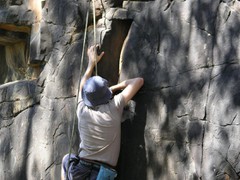 Ben Howrie on ★ Yellow Streak 18 - Pass the bolt. Maybe a lead in my future. 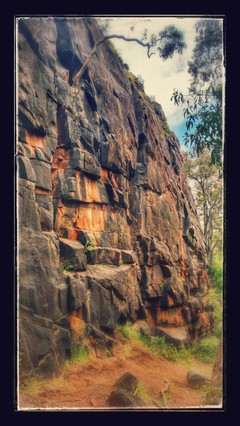 Check out what is happening in Churchman's Brook.