Please note that we use cookies to improve the use of this website. By continuing to browse the site, you accept theCrag Site Usage Policy I Agree
Australia
TasmaniaTas
West
Frenchmans Cap Area
Frenchmans Cap

Frenchman's Cap is a 1,446 metre high mountain in Franklin-Gordon Wild Rivers National Park in the West Coast region of Tasmania.

Known for its fantastic 400m high wall, Frenchmans Cap presents the longest vertical cliff in Australia. There is limitless potential for new routing, although any first ascentionist should carefully consider the existing ethic of the area, and the Tasmanian wilderness in general before placing any fixed gear.

The rock is bullet hard quartzite, reminiscent of Arapiles in parts, but which - due to low traffic and the frost-shattering nature of the area - often has brittle sections or individual holds. Occasionally you will also find sections of "cardboard rock" - hard on the outside, but hollow, light and with questionable strength. Under no circumstances should you ever (a) view a route from directly under those climbing it, or (b) climb without a helmet.

Most lines to date follow obvious features and have enough natural gear to keep things sane, but holds abound over the entire cap and it's possible that some mixed (or outrageously bold) routes - might spring up between the major lines over time. It's also possible they end up being the best routes of their kind in the country.

There exist numerous entire cliffs in the region without a single route up them - some 200m+ in length and the king lines have by no means gone - witness La Grande Pump Cave's 50m rising traverse, or Sharland Peak's 150m continuous arete as just a couple of examples.

Just as impressive are the surroundings. The Cap is the highest peak in the immediate vicinity and has good relevance, affording 360 degree views on a good day. It is a destination hike in its own right, and a very worthwhile one at that.

It's a 25km hike from the Lyell Highway.

6-8 hours from carpark. Less than an hour from the Tahune Hut (which is 25km from the Lyell Highway) up the path behind the hut overlooking Lake Tahune

Tahune Hut - recently upgraded (thanks Dick Smith) with triple glazed windows and a toilet with the greatest view of any you'll find anywhere. The hut is occasionally full, but tent platforms and the deck provide for overflow accommodation.

Trad, but some bolts exist where trad is not possible.

Frenchmans Cap is in The Franklin - Gordon Wild Rivers National Park and subject to the Tasmanian Wilderness Heritage Area Management Plan. Climbing is addressed on pages 143-14 of the plan. Some of the presceriptions related to climbing are:

• The area will be predominantly maintained as a traditional climbing area. • The establishment or maintenance of routes that are protected primarily or exclusively using fixed anchors (i.e. ‘sport’ climbs) is generally prohibited. • Existing routes in the 2013 minor boundary extension that use fixed anchors may be maintained. New routes may be established in existing locations where fixed anchors are utilised subject to approval by PWS. • Based on historical precedence, the occasional limited installation (or replacement) of permanent anchors at Mt Geryon, The Acropolis, Frenchmans Cap and Mt Anne is permitted. • Written authority must be obtained from the PWS before using power-driven equipment to install or replace any permanent anchor in the TWWHA.

First hand account of the first ascent of the main cliff by Bryden Allen: http://www.brydenallen.com/First_Ascent_of_the_Face_of_Frenchman's_Cap.html

Bryden Allen on ★★ The Sydney Route 16 - The Devils Staircase 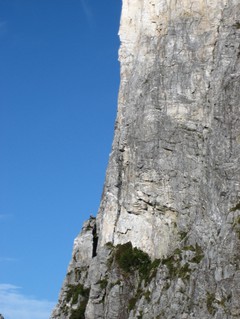 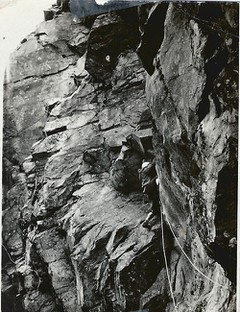 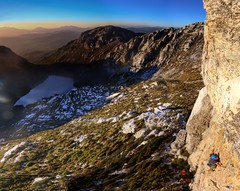 Check out what is happening in Frenchmans Cap.