Please note that we use cookies to improve the use of this website. By continuing to browse the site, you accept theCrag Site Usage Policy I Agree
Australia
New South Wales and ACTNSW & ACT
Northern Tablelands
Mt Yarrowyck

Mt Yarrowyck is granite bouldering and climbing. There is a lot of climbing that has been done and still more to be discovered. The boulders range from 2m to 15m high and the roped climbing is up to 2 pitches long.

The Mt Yarrowyck Nature Reserve west of Armidale is best known for it’s Aboriginal rock art and it’s isolation. However this area also offers some superb bouldering on exceptionally high quality granite. The boulder fields are extensive and the environment and landings usually friendly. The rock is featured with unusual crystalline pockets, heinous slopers and the arch-typical granite crimper. These combine to offer problems ranging from V0 slabs to steep pocketed test-pieces. The best time to climb is from March through to November. Winter days can be cold with single digit temperatures not unusual whilst pleasant summer mornings can give way to scorching midday sun. The area is serviced by the NPWS who maintain a toilet and some BBQs but drinking water is not available so be warned, particularly if you intend to visit in the summer months.

The majority of the bouldering and climbing at Yarrowyck is located on private property, and the land owner was a climber and has granted access to all climbers anytime, EXCEPT for all crags east of the ridge line which are too close to the land owners house and are off limits, in particular 'Captain Pugwash Memorial Buttress'.

Please do not leave garbage around, leave gates as you find them and do not harass stock. Climbing at Yarrowyck is a privilege, not a right.

The access tracks are in the Nature Reserve which is managed by NPWS which takes you to the Aboriginal Rock Art site. Bouldering or climbing in the reserve is not clear so please avoid this and check the boundaries when exploring.

Yarrowyck is about 30 minutes west of Armidale.

From Armidale take the Bundarra Rd from Richardsons Hardware store and the Sale yards for about 30 minutes.

When you get to the T-intersection at Thunderbolts Way, turn right and after about 1km turn right into the car park of the Mt Yarrowyck Reserve.

It wasn’t until 1975 that the potential of the boulder fields at Yarrowyck was realized. Although the crags higher up the hill had long been a focus of local attention, the numerous problems on the low lying boulders had gone largely unnoticed. Development following the initial reconnaissance's yielded a number of area classics including Killop's Killer , Burchill's Bomber, Latanzio's Lurch and Bayne's Claim To Fame. The main protagonists at this time being Bob Killop, John Latanzio, Brian Burchill, and Paul Bayne. Unlike other bouldering areas at that time the problems at Yarrowyck focused mostly on boldness rather than technical difficulty.

By the mid 80s the focus of the Armidale climbing scene had again returned to roped climbing with the popularity of the ‘practice boulders’ all but a fond memory. However the bouldering at Mt Yarrowyck returned briefly to the limelight in the early 90’s following the arrival of the now infamous Carl Schultz. Although Carl's bouldering passion was seen by some as an oddball activity, he pioneered a number of extremely difficult problems in the Armidale area, many of which are yet to see repeats. It was in 1997 that the Yarrowyck area underwent a full bouldering renaissance after being rediscovered by Armidale locals Ben Christian, Gordon Low, and Jeff Gracie. The new problems all focused on technical difficulty and included the development of the Sharpest Mono Area with it’s classic problems, 'Pocket Fest' (V2), and 'The Sharpest Mono in the World' (V3). Development went into overdrive in early 1999 when the mist finally cleared from Christians’ ‘bouldering goggles’ allowing him to at last realize the true potential of the area (something that Gracie had been telling him for years). The first focus of attention was 'The Trackside Boulder' where 'New Beginning' (V4) and 'Jingoism' (V7) both saw quick ascents. 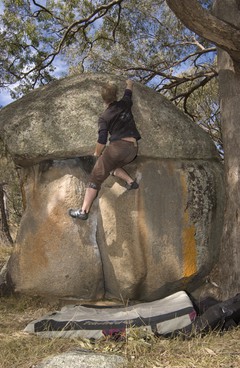 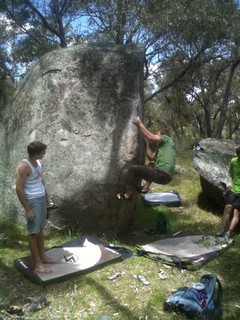 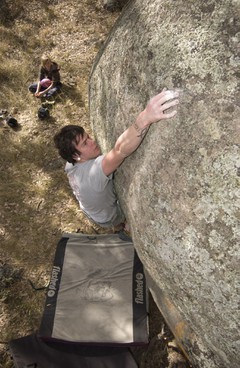 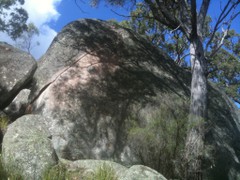 Check out what is happening in Mt Yarrowyck.