Please note that we use cookies to improve the use of this website. By continuing to browse the site, you accept theCrag Site Usage Policy I Agree
Australia
New South Wales and ACTNSW & ACT
Sydney Metropolitan
North Shore
Wahroonga
Browns Road

Overlooking Upper Lane Cove River in a nice bushland setting this area has a mix of boulder top rope and lead climbs. The area is worth a visit as there is something for everyone. There are numerous possibilities for new moderate sport routes.

Its probably worth mentioning that most of the rock here has seen some form of climbing at some point. Much of it is not recorded. So if you do put up a new route, record the details for future reference.

Park at the end of Browns Rd Wahroonga and take the track on the left end of the barrier fence. This brings you to a large, exposed stone platform which is the top of The Courtyard. Head down through the gully at the north end.

Recently some names have been mentioned about the origional developers. First ascents include Jon Reilly, who put the first bolts in, Rob Saunders, Hira Verick. Other names mentioned are Mike Myers, Justin Kennedy, Tim O'Neill and Libby Illy.

Many of the courtyard lines were apparently top roped and eventually soloed without crash mats many years back.

In recent years some sport routes went up in a cave down near the aid walls.

2013,2014 saw the replacement and additions of many of the tope rope anchors to back up or replace the manky fixed gear.

Early 2014 and some new easier routes on the lower cliff established with a mixed route approach.

A lot of the lines have old initials at the base. 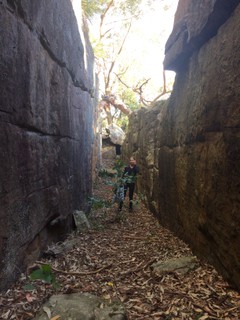 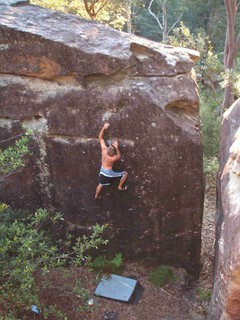 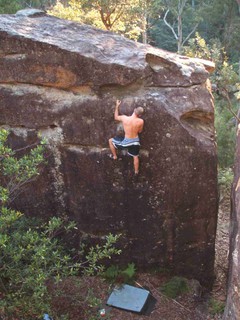 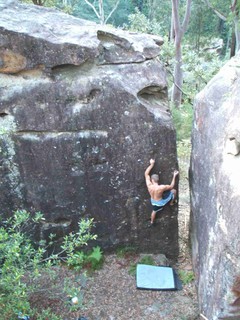 Check out what is happening in Browns Road.