Please note that we use cookies to improve the use of this website. By continuing to browse the site, you accept theCrag Site Usage Policy I Agree
Australia
New South Wales and ACTNSW & ACT
Illawarra
Wollongong
Scarborough Cliffs
Vegemite Wall

Due to a massive amount of vegetation on top of the wall the big downside is access. As it stands there are a few ways to get to it... all are shit, but rest assured, worth it. "Tim Tam Jam" in particular has some of the best and most sustained climbing on the escarpment.

The land about 100m below the cliffs is private land, so please don't drop large rocks down the slope or walk down to into their backyards! They can probably also hear your screams. Peregrine Falcons inhabit the cliff and nest in early Spring usually. Expect to be dive bombed then.

The best of the worst options is probably to fix a static rap in through the shrub above the cliff and jug back out it after finishing the climb. To find the rap in point park as for Whale of a Time and begin the walk in. A couple minutes after turning onto the nature walking track notice when it begins to descend. At the sharp bend accompanied with the steep downhill walk 15m toward the ocean, through the bush to the obvious rock outcropping. You now have a clear view of the coastline and should hopefully be able to find the vague "Path" through the bushes below by which to rap through. A medium sized tree makes a good anchor and 30m of static gets you to the top anchors of Tim Tam Jam. Wear helmuts and watch for loose rock. -34.263703, 150.957742

Another alternative that hasn't been tested but is worth a shot: At the bottom of the rap in for "Big Fin Slappers" descend down the slopes about 30m before tracking south along the cliffline. Tim Tam Jam can be found directly past the huge landslide gully (200m south of BFS) at the highest point of the dirt slopes (this is above a minor and very dirty "sub cliffline". The major crack line splitting its centre helps identify it along with a line of stainless leading up it.

Don't bolt cracks. Please. If bolting new routes please avoid squeeze jobs, linkups or variant starts/finishes. There is enough rock for heaps of independent lines. Go for a walk! If your proposed line comes within 3m of an established route, please ask the person whose route it is so as not to devalue their original vision. 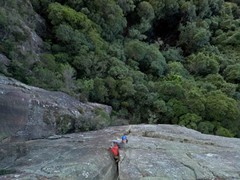 Check out what is happening in Vegemite Wall.