Please note that we use cookies to improve the use of this website. By continuing to browse the site, you accept theCrag Site Usage Policy I Agree
North America
Canada
Ontario
Eastern Ontario
Calabogie
Main Cliff (Summer - Rock)

This is a km+ cliff running north-south (west-facing). It is granitic gneiss. The cliff overlooks a swamp, and there tend to be a lot of bugs in season (mid-May to early-July).

There is easy access to the top of the cliff, making it easy to set up top-ropes for most of the climbs.

It is west-facing, getting afternoon sun.

There is a fair bit of development going on -- not all newer climbs are named, or have been named. Or the names may not have been well publicised.

Also, with the new development has come inconsistency in grading of the routes. The older routes tend to have "old school" grades (look for this on trad routes), while the new development in the 2010s has tended towards softer grades. (e.g. "Cool But Concerned" (5.8) is a tougher climb than "Hakuna-Matata" (5.10a).)

The number of potential routes on the cliff number into the hundreds, though most are not developped. Recently (2010), with the closure of much of the Gatineau park to climbing, there has been a renaissance in development at Calabogie, including some new hard sport routes (at a cliff that was mostly trad/top-rope previously).

This cliff also has some of the most reliable ice-climbs in the area.

Due to the history of this cliff, this listing includes a good number of the historical route descriptions that may refer to features (e.g. cairns) that no longer exist and routes that are now difficult to find or unfindable.

HEY CLIMBERS, YES THAT MEANS YOU! THE WAY YOU ACT AT THE CRAG CAN LEAD TO THE ACCESS BEING JEOPARDIZED! CLIFFS ARE BEING CLOSED AND THIS COULD HAPPEN HERE!

Don't play music, no one wants to hear it. Pick yours and others trash up and pack it out. Dig a hole to take a #2 in and burry it! Don't pee under boulders or overhangs because the rain can't wash it away. If you make a fire, keep it small and in a pit. Limit the size of your group. Brush your tick marks before you move on. Keep your dog on a leash and pick up after it. Don't smoke around people who don't want to be around it and pack out your butts.

Here is a good article talking about access issues recently (Read it, it only takes a minute)

Lake Cliff is on crown land however the property line (Land owned by Calabogie Peaks Resort) runs along the north west end of the cliff. The land north east of the cliff is owned by the Greater Madawaska Township. The Township has given permission to establish and maintain the trail network found here that crosses township land.

The Hydro/High Falls section was closed in 2002 due to deaths from an unexpected opening of the Barrett Chute Dam overflow gates. The land is fenced off and owned by Ontario Hydro.

To get to the cliff, continue on 508 (Calabogie Road) for 2.5km past the Barrett Chute turn-off, and park. There are two obvious pull-offs for the cliff. A larger parking area at the top of a hill and a smaller pull-off at the bottom about 100m further down Hwy 508 (from Ottawa). There are 3 main access trails to the cliff, detailed below.

1. From the pull-off at the top of the hill a rough bush road heads off to the south. Climb a short way up this, until it branches and follow the right branch, which will quickly become a good hiking trail. Follow this trail, until it becomes obvious you are walking along the top of the cliff. Stop at the point you want to climb, and either rappel down, or find one of the "easy way downs" and use that as the down-climb.

2. From the lower pull-off locate a foot path, bridge and a large trail sign on the south side of the road. Follow Manitoulin Mountain Trail (blue trail blazes) along the top of the cliff. Stop at the point you want to climb, and either rappel down, or find one of the "easy way downs" and use that as the down-climb.

3. From the lower pull-off locate a foot path, bridge and a large trail sign on the south side of the road. Follow Manitoulin Mountain Trail up a short hill and take the first right branch about 50m from the road. Follow this trail until you see a cliff to the left, this is the start of the cliff face at Finally. This trail continues along the base of the talus field with multiple paths heading up though the talus field to the cliff face. The two most obvious paths will put you near Black Book and Flakey Flake respectively (passed an obvious cave/roof boulder problem). This trail continues passed more boulders and eventually joins the cliff face near Stage Right before dumping out onto the talus field above the main boulder area and near the core values sector. This path is often very wet and swampy until late summer.

Rap off Scramble off Walk off

Mostly rappelling off anchors, or trees.

Historically there were three "Easy Way Downs" along the cliff used for top access, but only the "2nd Easy Way Down" is in current use.

The cliff was first explored and climbed in the 80s, and then almost abandoned (for summer climbing), allowing many routes to return to a natural state. Only a few routes in the area of the "2nd Easy Way Down" got much traffic.

With the closure of much of the climbing in the Gateineau Park in 2011, a new wave of development and re-development hit Calabogie with new (hard) sport routes such as "Lobotomy" being put up. Also, new anchors, some retro-bolting, and some new moderate sport or mixed routes as well. 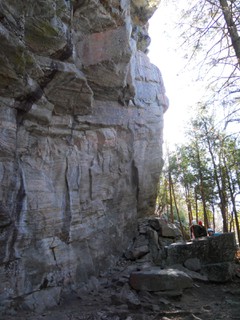 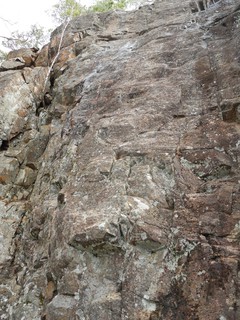 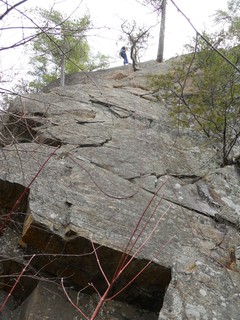 Check out what is happening in Main Cliff (Summer - Rock).