A solid piece of south-facing granite rock. Easily visible from the road, with a short approach, this is a very popular local area.

This cliff is south-facing and generally fairly wind-sheltered, making it a good early/late season cliff, but not generally a good choice for a hot summer day.

NEW ROUTE DEVELOPMENT IS NOT ALLOWED. DON'T DO IT.

https://ncc-ccn.gc.ca/places/rock-climbing links to https://ncc-website-2.s3.amazonaws.com/documents/Rock-Climbing-in-Gatineau-Park.pdf?mtime=20200113133647 which says, " Creating new routes is not permitted".

The Eardley Escarpment is contained in Gatineau Park, managed by the National Capital Commission (NCC). The NCC has closed climbing at all but a few of the crags. As of 2011, only Home Cliff (main corner area and rightwards to Piton Highway), Western Cwm (left or western side), the Twin Ribs (Copa Cabana and Down Under), and Eastern Block are open for climbing.

Cliff-top access is permitted only at Home Cliff and Western Cwm, at other crags climbs must be climbed from ground up.

The NCC, land-managers for Gatineau park, have a history of changing their web-page layout making direct-linking risky. As of fall 2018, their statement on climbing is available at: http://ncc-ccn.gc.ca/places/rock-climbing

While the origins of the closure was ecological sensitivity for the Eardley Escarpment (which is on the southern flank of the park), and originated as specific closures in that area, the current phrasing is a list of permitted areas within the park, meaning anything not in that list is, by omission, not open to climbing.

Take highway 148 west out of Gatineau, turn right on the second junction with Cregheur road, and proceed until the large boulder/bulge on the right with a parking pull-off just before it. (About 30 minutes from downtown Gatineau.)

A little farther along the road, will be a cart track along the right side of a farmer's field -- follow the cart track (stay on the track) to the back of the field, then left along the edge of the field until a trail leads up into the bushes. Follow the trail, through some small boulders to a wooden stair up to the cliff. 15-20 minutes. 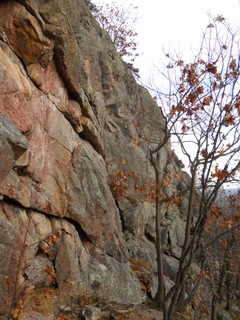 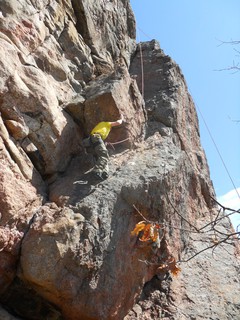 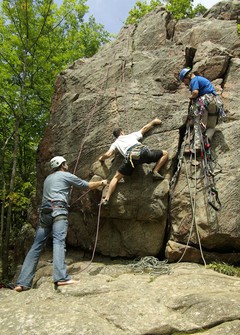 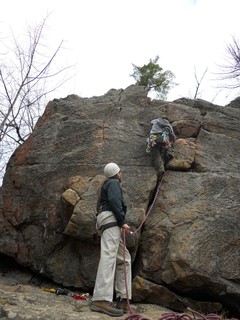 Check out what is happening in Home Cliff.