THE birthplace of free climbing: A lifetime of climbing with stout ethics among stunning sandstone towers - not for the faint hearted.

The Elbe Sandstone Mountains with their German part (Sächsische Schweiz = Saxon Switzerland) and the Czech counterpart (České Švýcarsko - Czech Switzerland) have long been a epicenter of climbing development (see History).

Today, luckily, the masses avoid the area mainly because of its grim reputation and stout ethics (see ethics), which require solid climbing skills, some modesty or someone giving advise on the route - even better, all of these. However, with roughly 1100 free standing rock formations and about 20000 routes to climb, this area is a must for the adventurous climber. Late spring till early autumn is the best time for climbing, although the enthusiast may also enjoy south faces on sunny winter days. These will be too hot in summer, but shady faces can always be found.

If you don't have a local friend that can tell you if that VIIa is really VIIa or actually feels like VIIIb with ground fall potential, check http://www.teufelsturm.de with a huge route database and invaluable comments on many routes (in German, but with straightforward icons) or visit https://elllocesaqui.wordpress.com/ for a good overview in english, specifically designed for visitors.

Other helpful websites are listed below. Most are in german, but they still provide a good overview for first time visitors. Especially helpful are the following websites, which recoomend nice, easy and beginner-friendly routes.

Or watch this helpful video https://www.youtube.com/watch?v=0jd3Gx9FzOA

Most parts right of the Elbe are located within the Nationalpark Sächsische Schweiz with all the rules you'd expect associated with this, but climbing is generally allowed. Left of the Elbe, the area is mostly covered by a lesser degree protection area (Landschaftsschutzgebiet), also with a well marked network of hiking trails. Some few summits are located on private property, see the guidebook. During spring and early summer, selected summits may be closed because of nesting falcons or owls - check at http://dav-felsinfo.de .

The area is best reached from Dresden by commuter trains running every half an hour from Dresden (30 - 45 min). Depending on your destination, you can then continue by foot or use buses for the more remote areas, for which a car might be more convenient when you plan to return in the late hours. The more frequented areas are better avoided by car at the weekends, as lots of hikers can occupy the little parking the is. There are not many real roadside crags - be prepared to walk from 15 min (e.g. Falkenstein) up to 2 h (Hinterer Zschand).

Being a popular tourist destination, many villages boast boarding houses and smaller hotels. The Sächsische Bergsteigerbund, a subdivision of the German Alpine Club, maintains two huts (Ottomühle and Saupsdorf) which generally require reservation (discounts on membership). Camping may be permitted at the alpine huts (charged) or on the camping ground in the Kirnitzschtal (NW of Bad Schandau). Traditionally, climbers used to bivouac at the walls under overhangs (Boofe ['boa-feh]). This is still tolerated in designated places (Freiübernachtungsstelle) There are 54 of these Boofen (https://www.wandern-saechsische-schweiz.de/wordpress/boofenliste/) Tread extremely lightly, as anything else endangers this compromise: no fires, no littering, dig a hole. Every summer the discussion about closing these bivouac sites rises again, so PLEASE sleep exclusively in the designated places and Leave No Trace.

You want ethics? This is the home of ethics. Most of these are peculiar for outsiders, but have a long history. Although every few years eagerly debated, they are still valid and even legally binding by being referenced by the Nationalpark regulations. They can be summarized as:

The Elbe Sandstone Mountains are probably the birthplace of modern freeclimbing and certainly one of the most historic climbing areas you can find. Not counting the Bronze-age settlement on Pfaffenstein nor the occassional remains of castles of robber-knight on some summits, climbing here dates back to the mid 19th century.

In 1864, gymnasts from Bad Schandau ascended the Falkenstein. While their style (using ladders, thrown ropes and pick-axes) saw a few imitators, it soon became clear that what we today call "free-climbing" is the way to go. Oskar Schuster and Rudolf Fehrmann were among the driving forces to formulate the Saxonian climbing rules, as they still stand today (see ethics): no climbing onto anything "a cow could ascend" (ie only true summits), no progress on artificial holds, placing bolts only as the last resort. This visionary abstinence, born from a mixture of elitarism, boldness and an eye for conservation issues alike, helped to form a climbing standard that was unrivalled in the world for decades until the 1970ies. Milestones like Spannagelturm Perrykante (VIIb) by Oliver Perry-Smith (1906), Wilder Kopf Westkante (VIIIa) by Emanuel Strubich (1918), Frienstein Königshangel IXa by Fritz Eske (1965) and Amselspitze Schallmauer Xa (Bernd Arnold) are still testpieces for modern climbers - especially when you would climb with the equipment of the respective era.

Saxonian climbers like Fehrmann and Strubich also left their footprints in Alps. In the 1930ies, Fritz Wiessner brought Saxonian ethics to the USA, where it evolved to modern freeclimbing and finally spread over the world.

The two World Wars took their toll among climbers - but also the crags - a great part of the Elbe Sandstone Mountains became part of Chechoslovakia, which made climbing trips for climbers crossing the border a little more complicated. During the Socialist era, free traveling to western countries was banned. Arguably, this may also have contributed to the rise of climbing difficulties: climbers like Karl-Heinz Gonda, Bernd Arnold, Mathias Gäbler and Manfred Vogel established benchmarks of their time. However, in the recent decades the strict gound-up ethic made the creation of climbs at the top end of the scale increasingly difficult if not impossible. Already, some first ascenders have been suspected to bend the rules; and debated routes have even been removed. Every few years, the controversy between traditionalist (defending the status quo) and reformers (wishing to allow climbing on currently forbidden walls and rappel-bolting) boils up again. So far, the tradition stood its ground, supported by the National Park administration, who also favours restrictive climbing rules.

Whatever the future may bring, with roughly 20000 routes there is a lifetime of climbing - and despite being considered "outclimbed" for first ascents long ago, some enthusiast still add some hundred routes each year. 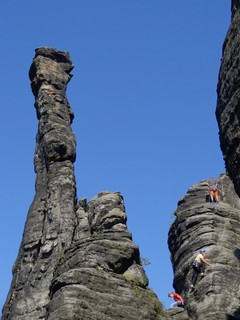 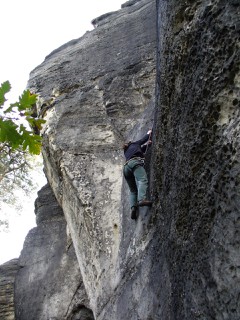 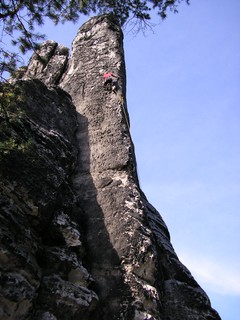 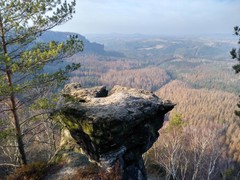 Check out what is happening in Sächsische Schweiz.