Please note that we use cookies to improve the use of this website. By continuing to browse the site, you accept theCrag Site Usage Policy I Agree
North America
Mexico
Chiapas
San Cristóbal de las Casas
El Arcotete

Beautiful limestone arch with amazing routes and tufas. Mostly steep climbing with roof sections, often above the small river running through the cave.

Dry in the rain

Despite the steepness you also find easier routes. Some of the routes have extensions into the higher sections of the cave.

Due to the fact that many of the steep routes end above the river, cleaning the routes can be rather challenging and it is not unlikely that you end up with a wet rope or wet feet

. Downclimbing is definitely something to think about for some routes.

The cave is shaded all day and well protected from rain. That being said, it can be quite chilly at the base as the wind blows through the cave, especially if you belay from the Big Ledge.

Also, be aware that the park is quite popular with zip-lining, horseback riding and hiking. Many of the tourists come down to the base of the climbs and take pictures. Watch out to not throw rocks on them

From San Cristóbal drive east in direction of Tenejapa. After about 5km you will see a big Pemex petrol station on your right and shortly thereafter a big sign for the El Arcotete Parque Ecoturistico. Take a right on this dirt road and follow the signs to the park. The last part of the road is a steep downhill. Park there and hike down the stairs to the river where the climbing is.

In San Cristóbal de las Casas or you may camp for a small fee ($35 pesos for the first and $25 for subsequent nights) at the El Arcotete Parque Ecoturistico.

Be aware that some of the stalactites can break if they are wet on the bottom or simply to thin.

The Arcotete has a long history. They say, the old mayas already used it for their ceremonies and as a place to do offerings to their gods. Later on, at the time when San Cristóbal de las Casas was built, they tell the legend from a Frenchmen called Jean Francois d'Arcotete. He gave the name to the arch, which we use until today. Because of the loss of his wife, he took his life inside the arch. According to the locals, you can still here Jean weeping, in some of the cold nights in february.

Today, the Arcotete is an ecoturistic park inside the terrain of a local tsotsil comunity. The first climbing routes where established by Grupo Escala Chiapas. From 2003 to 2011 the group equiped 7 routes in the area. Years later in 2017, Sofia Tapia Garcia and Martin Siller explored the huge potencial of the arch and started equiping more than 30 routes. With the help from their friends Jose Carlos Ramos, Lucas Warmington, Ulises Guerrero, Karsten Thess and Ernesto Hernandez they changed the place within a year into a nice little climbing crag. 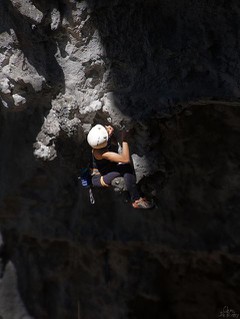 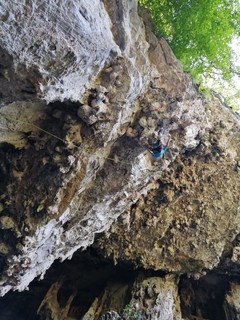 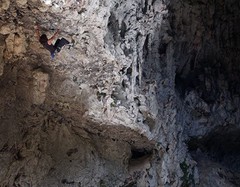 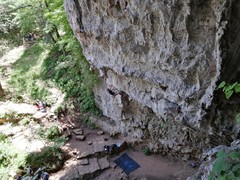 Check out what is happening in El Arcotete.