Please note that we use cookies to improve the use of this website. By continuing to browse the site, you accept theCrag Site Usage Policy I Agree
Africa
South Africa
Western Cape
Du Toit's Kloof Pass
Yellowwood
Yellowwood Amphitheatre

South Africa has ordered a national lockdown from March 27.

We don't know where this cliff is located. Do you?

The Ravine, Amphitheatre and most of the climbable rock is on the farm Gevonden 733 and is privately owned by the Dave Richter family trust. There is tacit permission to climb at Yellowwood by the beneficiaries of the trust provided we do not engage in any eco-unfriendly practises.

Depending on the route and your ropes length, choose the fastest between these 3 possible options : walking back and using the Timerity Abseil, using Down Time Abseil, or walking further to the gulley between Smalblaar ridge and the chesspieces (3 raps).

The prevailing ethic for Yellowwood is tread lightly.

"Tread lightly" means no bolting of belay stances unless all possible alternatives have been completely exhausted. No placing of bolts for running belays that are not absolutely essential. No use of pitons, unless necessary. No use of power drills is accepted!

Climbers are asked to respect the prevailing ethic which is intended to preserve the aesthetic appeal of Yellowwood as a world-class Trad climbing destination.

It is essential for first time visitors to do an ascent of one of the existing classic trad routes to appreciate the committing and adventurous nature of the climbing at Yellowwood. Older routes such as Armageddon Time (and the direct), Blood is Sweeter than Honey and Time Warp are all test pieces for their grade. And newer routes such as Prime Time (and the direct) and Fantastic Time as well as "routes in progress" of which there at least 3, are no less demanding at the grade. Most, if not all the trad routes on the main wall have at least one "R" (run-out) pitch but none are "X" rated. There is minimal fixed gear and very few fixed stance

A new route on Yellowwood, Fighting The Dark Side Of Gravity, has had all its bolts removed, except for two that are essential for the leader on Pitch 3. Two non-essential pitons have also been removed.

There has been much debate about Yellowwood and the most active Yellowwood climbers have talked extensively so as to settle the ethos of this high-value cliff.

2014: There have been no less than 10 new multi-pitch trad routes established at Yellowwood in the first 5 months of this year. Together they constitute no less than 60 pitches or, combined, more than 1500m of climbing. All the routes have been free-climbed with the vast majority of the pitches of being moderate grade and only 2 pitches of grade 22 and one of grade 24. The routes are all well protected and no fixed gear was necessary.

This cliff is unlocated

If you know where this cliff is then please take a minute to locate it for the climbing community. contact us if you have any issues. 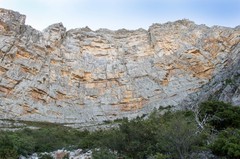 Check out what is happening in Yellowwood Amphitheatre.