Please note that we use cookies to improve the use of this website. By continuing to browse the site, you accept theCrag Site Usage Policy I Agree
Europe
Spain
Catalunya
Central Outer Pyrenees
Terradets

Most well known these days for the sector Paret de les Bruixes (the Witches Wall) offering superb hard sport climbing, Terradets has much more to offer in terms of easier climbing and multipitches.

Sleeping in the train station is no longer allowed. There is a nearby refugio in Cellers which enables walking to the climbing. Hotel Terradets is also in Cellers but is rather expensive. If you are willing to drive 30 minutes each day there are nice places to rent in nearby villages.

Actually Terradets is known for it's hard sports routes in the Paret de les Bruixes, but this is an historic place, a major symbol of other times, the eighties, when the objective were the long climbs, clearly more difficult than the older ones (but easy for today), which made necessary the bolting from above, for the first time in Spain (1980).

The first route (of all the non-Pyrenees area...) was set in 1959, following a not much attractive line, but the possible one. It didn't have much "calling effect". The zone had to wait until the beginnig of the 70s to be interesting, and in that time some routes were set following the cracks, corners, and dihedrals, with much aid climbing. The jewel of that time is the CADE (a section of a club), today maybe the most polished route in Spain...

But this wall (Baggases wall) had a little problem... the rock is very compact and there is a lack of good cracks for gear (at least for the gear available is Spain)... and the solution was a bit revolutionary and polemic...the bolting from above!

In a few years, the wall was filled with a lot of routes bolted from above in the range 6a-6c, becoming one of the milestones at that time. As a counterpart, very few new routes from 1995 or so.

Behind this wall, there is another one with a history a bit different, here the rock offers more possibilities for aid climbing or mixed climbing, so the routes were opened from below, is the classic way, up to A4+, basically in the '80's.

After that, in the 90s, the sports routes were developed,that have given a new name to this zone. Actually, new routes are added to the walls that were a bit forgotten in ancient times. 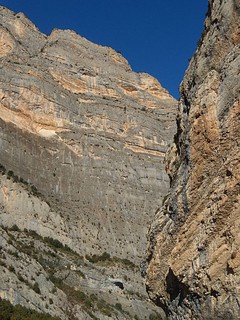 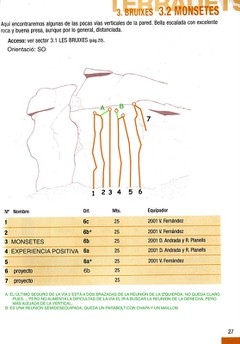 Check out what is happening in Terradets.