Please note that we use cookies to improve the use of this website. By continuing to browse the site, you accept theCrag Site Usage Policy I Agree
North America
United StatesUSA
California
San Francisco Bay Area
San Francisco and Peninsula
Cliff House

The SF Recreation & Parks Department have closed all Ocean Beach parking lots due to the COVID-19 pandemic.

For up to date COVID-19 restrictions in the Bay Area, please refer to the Bay Area Climber's Coalition.

A small, but reasonably good selection of tide- & swell-dependent highball boulder problems between the northern end of Ocean Beach and the ruins of the Sutro Baths, below the Cliff House.

The most concentrated and popular sector is at the northern end of Ocean Beach - it is described in detail below. There are, however, more problems scattered further north around the cliffline all the way to the Sutro Baths, though they are generally only accessible during extreme low tides and/or at times of high sand.

Take care as you climb above the wave zone, as the rock gets crumbly right about where it gets highball, and the top outs can be nasty (sloping sand & loose gravel). Bring a pad, since the sand varies by up to 6' or so over the course of the year (high in summer, low in winter) and can be wet & hard packed. All listed grades are for when the sand is high (summer) - when the sand is low the steep, slimy lower part of the wall is exposed, typically upping the grades.

This wall is almost guaranteed to be cool, even on those (rare) hot San Francisco days. The rock can be damp though, particularly near and inside the cave, both because of the proximity of the ocean and because of the constant sea spray.

A large nylon brush is worth bringing, to remove the worst of the sand from the lower holds, and the loose gravel from the higher ones (especially the topouts).

The best descent and top access are to the right, facing the cliff. While it's possible to descend on the left, the rock quality is dire.

A tide chart is available here.

Important Note: sometime in late 2015 / early 2016 the massive boulder that formed the main top rope anchor disappeared, presumably removed as a safety precaution by the city (it didn't appear to be attached to the rock platform, but must have weighed several tonnes). As a result it is no longer possible to safely rig a top rope here!

This is NPS land (part of the GGNRA).

Park in the northern-most Ocean Beach parking lot, just before the road winds up the hill to the Cliff House. Walk north along the beach passing the 'Initial Wall' on your right. The 'Main Wall' is located just around the first protruding nose of low-angled rocks (which is the descent / access to the top). 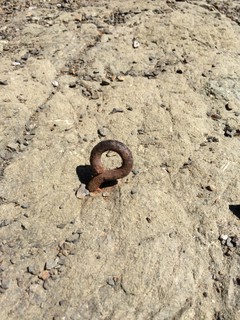 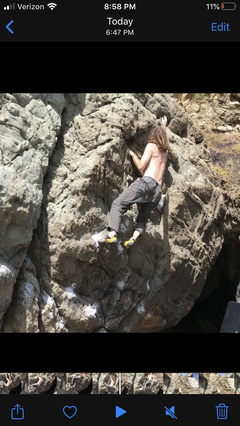 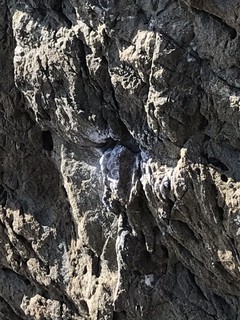 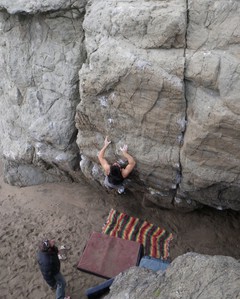 Check out what is happening in Cliff House.