Simply put, Rifle Mountain Park offers the best limestone sport climbing in North America, especially at the 5.12 and up grades. This riparian mountain canyon 200 miles west of Boulder has undergone numerous evolutionary phases over the last decade, yet it still maintains its allure and is fairly crowded on most weekends from May through September.

The climbing at Rifle varies from slightly overhanging to very overhanging, and the routes are generally long, complex endurance-fests on large, flat holds, pockets, crimps and funky pinches. Constant traffic on some of the older routes, especially at the Ruckman Cave and the Wasteland, has turned the footholds black with shoe rubber. Many of the older routes have surely gained a letter grade or two from the grease factor alone.

Rifle hosts one of, if not the largest concentration of 5.13-5.14 sport routes in America, most of them natural, most of them quality. The rock itself, limestone of the Leadville formation, varies both in quality and aspect from wall to wall. The Wasteland, for example, offers short (50 foot) power routes on pocket and tufa-riddled stone similar to the good stuff in Europe; the towering Anti-Phil Wall, with its perfect crimpers and smooth pockets reminds one of the Blasphemy Wall at the VRG; and the looming steepness of The Arsenal offers blocky cave climbing on "pile" rock reminiscent of the good stuff at American Fork. But these are just a few of the walls.

Rifle is somewhat lacking in "moderate" routes, which can be frustrating for novice & mid-level sport climbers. This has more to do with the nature of the rock than the prejudice of route developers. The lower-angled rock tends to be covered in silt, moss, or both. Attempts to clean are somewhat futile as regular rains re-deposit a fresh layer of munge on a near-weekly basis. There are enough high quality 5.11s & below to keep most climbers busy for at least a week.

It's important to remember that access to Rifle Mountain Park has been an issue in the past. The park is owned by the city of Rifle, and locals from town were going up there to camp, barbecue, fish and picnic long before we climbers ever showed up. The Canyon is open to new route development on a permit system only, and any rock owned by fish hatchery at the west end of the Canyon is strictly off-limits.

While Rifle does offer a handful of moderate routes, they're generally quite polished and uninspiring. The steep stone doesn't suffer from constant run-off like the slabbier stuff, hence the "good" climbing seems to start around 11a or so. Currently the hardest route at Rifle is 5.14c.

Drive west to Glenwood Springs on I-70. Ten miles further west take the Newcastle exit. Turn right off the freeway and come to a stop sign. Continue straight (north) on a four-lane road that then bends west through Castle Valley, a housing development just outside of town. After a couple of miles this road dead ends at Grass Valley Road.

Follow Grass Valley Road west, passing the turn-offs for East Elk Canyon, Main Elk Canyon (home of the Fortress of Solitude), West Elk Canyon, and Harvey Gap. After about 6-8 miles Grass Valley Road comes to a T-intersection. Turn right and follow this paved road up up up past the fish hatchery, where it turns to dirt. You're now in Rifle Mountain Park.

Camp in the campground in the park itself.

Pay your entrance fee, don't park where you're not supposed to, and keep a low, friendly profile. The climbing here is excellent, and there's more than enough routes to go around. 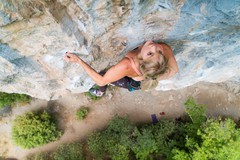 Check out what is happening in Rifle Mountain Park.