Please note that we use cookies to improve the use of this website. By continuing to browse the site, you accept theCrag Site Usage Policy I Agree
North America
United StatesUSA
North Carolina
Rumbling Bald

With all the breakfast-sounding names associated with Rumbling Bald (Hickory Nut Gorge, Cereal Buttress, Frosted Flake), you might think the place was a theme park dreamed up by General Mills. In fact, Rumbling Bald is an excellent winter climbing destination in North Carolina, featuring a mix of granite/gneiss crack and friction climbs, trad and sport styles.

Rumbling Bald is located just outside the town of Chimney Rock. From points west (Asheville, etc.), pick up US 74A and go east to where 74A combines with US 64 and SR 9 near Bat Cave. From points east (Charlotte), exit I-85 south of Charlotte for Kings Mountain and US 74; follow 74 west to Forest City and veer off on US 74A west to Bat Cave.

From Bat Cave, follow the signs for Chimney Rock Park and pass the park entrance as you go through the town of Chimney Rock. Not quite a half mile past the park, turn left on Boys Camp Road (SR 1305). Follow this for about a mile and a half to a dirt access road on the left; take the dirt road to one of two parking areas for Rumbling Bald.

Camping is not allowed at Rumbling Bald, but there are private campgrounds nearby in the Chimney Rock area. The town also hosts B&Bs and motels for those not wanting to camp, along with good places to eat along the scenic Broad River. And if you get bored with climbing, you can join the tourists across the river at Chimney Rock Park (there is actually climbing in this state-owned park, but only if you hire an authorized guide service).

Everything goes here, there are bolted routes, traditional routes, mixed routes and bouldering.

The history of climbing here is a little hazy, but the first ascents were apparently done in the early 1970s in what’s now known as the Flakeview Area. In the mid-70s, route development began at the Cereal Buttress, with first ascents like Shredded Wheat being made by Jeep Gaskin. Other RB pioneers include Grover Cable, Don Hunley and Sean and Shane Cobourn. The 80s were a time of big growth at areas like Hanging Chain Wall; the 5.12b route of the same name was at one time the hardest line in North Carolina.

In the 90s, Rumbling Bald was closed for several years due to access issues with neighboring landowners. In the late 90s, however, the crag was reopened, with bouldering gaining a predominant popularity among climbers. Most recently, Sean Cobourn and partners have been busy exploring and establishing new routes on Rumbling Bald's north face. At present, land purchases by the Carolina Climbers Coalition, combined with state plans for a Hickory Nut Gorge State Park, make the outlook excellent for continued access. 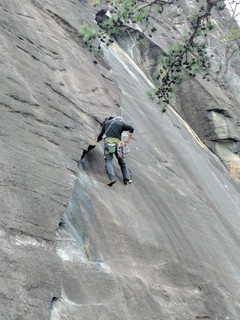 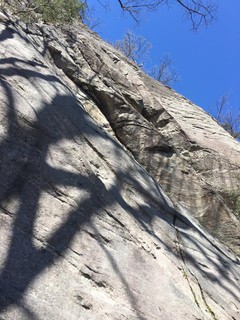 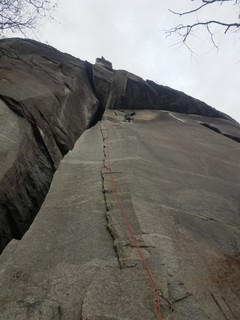 Check out what is happening in Rumbling Bald.