Alfonso started this discussion 9 weeks ago.

Hi, y have a doubt, here in my classic graduation pyramid it appears as if I had done a 7b route, but in reality what I did was mix a multipitch route in wich I only did one pitch of a route where the hardest pitch was a 7b, and when I registered it I only marked as done the exact pitch that I did.

Thanks in advance guys!!

Can you provide a link of the route? Maybe there's something wrong with the database entry. It's also possible that you forgot to remove the not climbed pitches when logging via "log pitches".

I tried to replicate your preblem here, but it works fine for me. Doesn't show an 8a onsight on my profile when I log the first 6c pitch of this 8a multi.

That's the link, I did the first one of "Esplon Manolin" the second one of "evolution rock" and "diedro loquillo" What I did, was to mark the pitches I didn't do as "none" in the field where you would usually mark as on sight, flash, etc. wich according to what you say that may be the problem.

What do you exactly mean by remove the non climbed pitches?

To remove the non-climbed pitches, press the "-" next to them instead of selecting a tick type of "none".

That's it Sergey Komarov thanks a lot!!

Hi again... I do have a similar problem of what happend to me last time.

There I have climb that route "Alaiz" twice (leading the 6b+ pitch of that route), however in the graduation pyramid it didn't appear, even though it is correctly registered.

Don't know if that may be a recurrent problem in other routes as well or if it is a specific problem.

Alfonso I can't see your pyramid as your profile is private. It seems the ascent garde was entered as "6b+ 5" which might be a reason for this, can you please check that?

It's public now (I didn't even knew I had it private) and yes near the name of the route it said "6b+ 5" but I registered pitch by pitch as I always do in multipitch.

(In the picture, the second time I repeat that line we rappel down form the top and skyp the first pitch)

Thanks Alfonso - we'll have a look

. one was the stange ascent grade of "6b+ 5" which was created as 2 French grading systems were mixed, i have changed that. The othe rone is probably due to te fact that "lead" is not shown on the pyramid. If you click on the empty space for 6b+ in your pyramid it actually shows this ascent. Could you just for testing please change the tick type to eg red point and let us know? Thanks!

Hi Ulfi, Fort of all thanks for your interest in my issue!!!

I have change it to red point but still didn't appear in the piramid unless you click on the empty space.

And regarding the the other issue about the double grading, which was the issue? the way I registered that route in its moment, the way I registeret it when I climb it or something else? Cause I did that line twice and in the first one it still appear the grade as "6b+ 5", I try to edit that climb too (I just change a little the comment I made in that climb) but it still remains the same as "6b+ 5"

Also I did a quick survey and in a climb I did on "la pedriza" in a place call "el pajaro" there is a climb where it happens the same. The climb appear as "6a 5" which may be weirder cause the grades in that route go down to the 3 in some pitches.

Un any case apart form the fact that those route did not appear, if you tell me which was the problem with the double grading I can make a Check on all the route I registered in the app.

Is is this only because there are "two" grading systems in the route?
Them being:

I guess the system is taking the hardest pitch grade from each system and merging them together. So you get "5+ 6b+" because it doesn't "understand" that 6b+ is already harder than 5+.

I changed manually the grades, example: "5a" instead of "5". And it was logged correctly and only showing the "6b+". Following, the example. 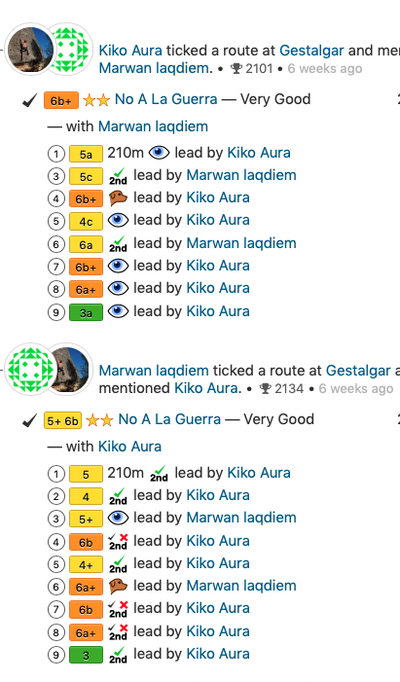 So my question is: is there a way around this?

Manually changing grades in multipitch routes to only use one system would solve future ascent entries.

Thanks for your input - the first problem is as Kiko Aura says, we have 2 French systems in one route. This is still not the reason for not showing on the pyramid and we are struggling to find out why this is. What was your experience with that Kiko?

Just tried now with a route. This one. In my experience: 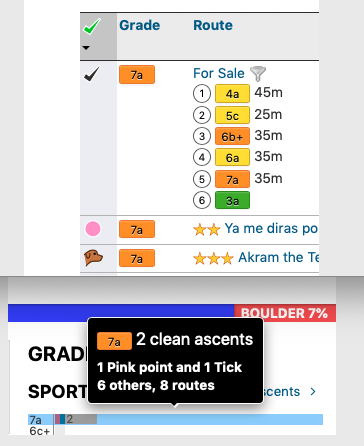 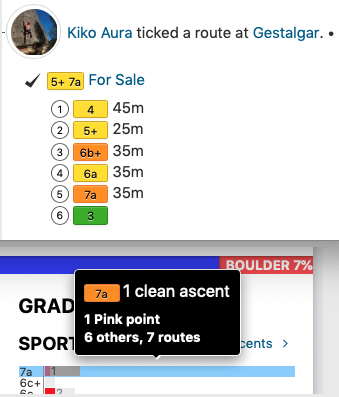 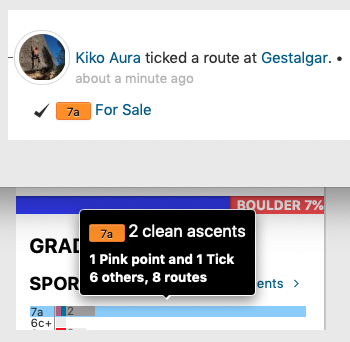 So the solution goes by using only one grade system?

And in that case if you use 5, 5+ what should you do when grading as 6a so it take it as the same grading system?. Cuse is as Kiko Aura said, here in Spain for lower grades we use 3, 3+, 4, 4+, 5 and 5+, we do not use letters for lower grades or at least I have never saw any guide that actually used 5a+ and such.

Doesn't make sense from the "spanish" point of view in lower grades.

After some investigation it is clear that this is definitely the 6b+ 5 bug. Please note that the problem is with the ascent pitch grades not the route pitch grades. It is just that the ascent gets the grades from the route, but you can adjust them manually for your ascent.

If you have the double grade in the ascent then the system assigns an internal grade spanning the difficulty level of both (ie a range from 5 to 6b+). The pyramid count will be added to the grade this maps to, which is somewhere around 6a which of course is not correct.

Correcting the ascent grade fixes the issue. The reason why Alfonso 's account did not look fixed when we corrected it was because there were two ascents. Once corrected the second ascent it appeared in the pyramid correctly.

So the bug is in creating the double ascent grade from the pitches. Where this has happened in the past, ascents need to be fixed manually.

I have hot fixed the double grade bug. Can somebody please test and confirm.

The fix was a general failure case if different grading systems were used in pitches. The algorithm to infer the overall ascent grade has been improved to take into account the level of difficulty of the grade if grading systems are different. So the hardest grade should prevail. It will also still double grade if there is an aid grade in the pitches.

Note that ascents already logged keep their double grade deficiency until they are updated manually. For the few ascents where this has occurred we decided it was not a great way to spend our limited resources writing a migration fix script. Sorry about that, but it is an unfortunate reality of being under resourced.

So I believe the key issue for this discussion has been resolved.

There was a side issue discussing alternate French grades. It is correct that our assumption of two alternate grading systems is not ideal as the lower grades tend to almost be exclusively without a letter and higher grades the other way around. Unfortunately we discovered this well after implementation and it is a difficult change. I have in my mind to swing around and address this sometime in the future but probably a long way off. There is a lot of analysis to work out exactly what to do.

Note that alternate grades for a particular grading system are a reality globally. For example 5.12 and 5.12a are both used and understood by climbers.

Hi, I have tried and works as expected. Thanks!