Discussion: 大部分岩场暂时关闭 Most crags are closed

Due to some climbers refused to sign waiver, crags are closed temporarily.

I think the problem goes beyond the non-signature of the waivers. There has been arguments on access at Shigu for a long time already. The new people working at the climbing base want to regulate the access by setting ground rules on their side. While other guest houses owners and route developers wants their guest to be free to climb anywhere. This led to a lot of tensions over the past few months, and eventually the shut down we are seeing these days. Hopefully all the stakeholders (guest house owners, route setters, climbing base people, local government officers) can sit around the table and find the most responsible solution for the future of the valley.

Agree that there are bigger problems and conflicts. There were more discussions and details I didn’t write/translate here. I know three guest house owners encourage guests to cooperate. Climbing base pays annual contract fee to the village for accessing the crags, so they are also liable for accidents. The accident in Kumming last year made Xiao Mo Yu Cave closed, I guess they don’t want the same thing happen to ShiGu.

Not sure if you saw the waiver or not, I don’t see how signing a waiver will “regulate the access”? As the Base is kind of “renting”/maintaining the crags, I personally don’t see a problem letting them know I will climb there, as long as they don’t give me troubles.

I didn't see the waiver, so it is difficult to position myself on it. If the content is just about discharging responsibility from local government, I wouldn't mind signing it. Also, from what I heard, the climbing base is not renting the places, nor they are maintaining them (that's what Ling and Shigu local officials were saying when I was there a few weeks ago). I also met some of the climbing base people at Diamond wall, and found they had very little experience about climbing, and were acting dangerously (standing between the belayer and the climber because they didn't want them to climb). So I hardly imagine them developing routes or taking care of replacing gear. In any case, I am not taking sides. I just believe some mature discussions are necessary, and that personal interests should be taken out of the picture. What we need here is a safe environment where people are able to climb/develop the way they want, while local villagers benefit from the visitors.

My wife and I stayed in 3 different guest houses in ShiGu, so we heard stories from both sides. Too many to translate...

Anyway, hope the problem can be resolved soon, and the crags can be reopened.

“ While other guest houses owners and route developers wants their guest to be free to climb anywhere.” since the guest houses owners don't reach an agreement yet,they may "sit around the table and find the most responsible solution for the future of the valley",tell the climers live in their house to climb free(maybe mean not follow the rules) is really not a good idea. Mostly i agree with Arthur Fernande，hope they can talk and work it out together soon.

I can tell you something I have heared: the climbing base has actully rented this plase; the Diamond Wall was bolted and clean by the base in 2015 -2016,you can ask Ling is there any route in Diamond wall bolted by them? In october 2020 , the path was destroy by flood, the base repaired it; and the toilet in DW was bulted by them. there are five guest houses in the valley , and four guest houses' climbers agree to sign. I'm not worker of the base, but I am here long enough so I can tell you something I knew. and the last , everyone has the responsibilty of this thing if he refused to sign waiver.

Oh really ? I thought most of the routes in Diamond were bolted by Paul and Marco/Enzo. Anyway, this doesn't excuse dangerous or rude behaviors. I hope everyone can go over personal emotions and find the best solution for all people living in the valley. As an outsider, I find it very sad to witness this.

Paul 邱江 is one of the founders of the Base.

Marcos/Enzo were invated to bolted routes by base, and the bolts were sponsored by base. This problem has a long time ,at the begaining , the worker was reasonable,but how can base's worker keep reasonable if you guys didn't signed waiver and argue with them in such as a long time? though the base' owner were change, but some founders haven't leaved, Paul was going back to base in 2020.I don't kown how you get those thing, and I think it's insignificance to say things with you, first, you just knew very little things about this things, second, Shigu was closed because some guys didn't follow the rules though most climbers follow it. It's hard to follow the rules? Now climbing free is a dream, you know the reason why. At the end ,it's norml that I am very angery, I follow the rules but I can't climb any more because some guys didn't sign waiver and bring arguement to the climbing area.

tianzong let me IM you on wechat to share more information I know.

Here is the waiver 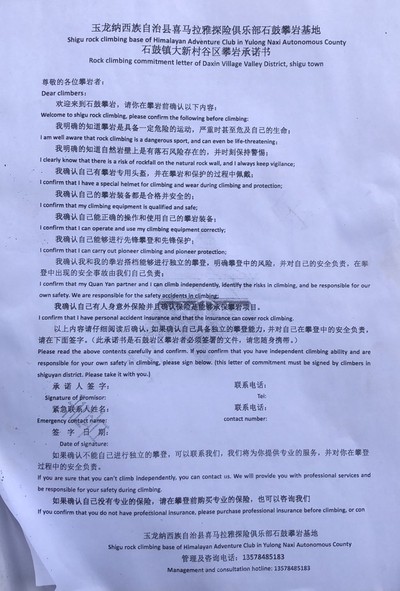 Min He replied 10 weeks ago.

wenpei he 小文 replied 9 weeks ago.