A large bushfire burned through North Black Range bouldering areas from late November 2019 to late January 2020. As of 10 May 2021, the park has re-opened after fire-related closures.

Some problems/areas may have been damaged by fire, exercise caution. Any reports on the extent of damage (or lack thereof) would be appreciated, especially if there are unsafe problems/significant damage.

FIRST AND FOREMOST
- bring a wire-bristle brush, attached to a broom if possible, and a soft bristled brush. This place grows moss like crazy! But has AMAZING features for granite.

A fair distance out of Canberra, these granite boulders are situated in the hills of Tallaganda National Park, in a eucalypt forest. The area was first developed as a bouldering area by Duncan Brown and has since seen a lot of development by Chris Warner, George Fieg and Andrew Bull among others. The boulders are wide-spread and numerous, and most likely home of the greatest number of problems Canberra has to offer, which are quickly being recorded and topographically described due to the hard work of Duncan Brown and other keen climbers.

These boulders lie in a national park. While there are no current access restrictions, please respect the nature of the park and aim to minimise your impact. Refer to the NPWS alerts page for the park for up-to-date access information.

Update Late June 2021:
Roadworks are actively being undertaken on Forbes Creek Rd. This has generally improved the condition of the road compared to pre-bushfires, particularly closer to the climbing areas which used to be badly washed out and difficult/impassable for a low-slung 2WD. Additionally, the Forbes Creek bridge has been upgraded.
Directions:
Drive out of Queanbeyan towards Bungendore on the Kings Highway and take a right onto Captain's Flat Road. After driving for a fair while (about 13.5km) turn left onto Briars Sharrow Road (this is easily missed). Cross the creek and continue a short distance, taking the next right. Drive to the end of this road and at the T-intersection turn right, to Hoskinstown. Drive through the town and take a left onto a dirt road (Forbes Creek Road). The dirt road continues for some 10km through fairly rough terrain (but doable for a 2WD) - continue on until you reach a small parking area with an information sign. Back up the road some five metres and to the right is The Hill, and on the left are the remainder of the areas. Allow 1 to 1.5 hours to get there from Canberra.

A description provided by Duncan Brown to australianbouldering.com in July 2002

"I first found North Black in 1999 shortly after starting climbing but believing everything to be too hard it was left alone until I returned with my brother Jarvis, Ky Wittich and Chris Webb in early 2000. That year saw us develop most of the problems in two areas: the Campground and the Hill, leaving pretty much only the hardest lines undone. Some of the most notable asscents of that year were Leeson Roses 'Percival the Fiesty Mouse' V8, my 'The Mojo Connection' V7 and Ky's establishment of the desperate 'Bumknut' V5??? (which remained unrepeated despite many strong attempts until Elmar Jerg managed it in June,2002). During that time many other classic hard lines were cleaned but awaited (and some still await) someone strong enough to send them. At the end of 2000 some new keen developers joined in, most notably Andrew Bull & George Fieg. Over the next year or so they cleaned up numerous unfinished projects including Andrew's spectacular 'Nob Jockey' V8, as well as finding and developing several new areas just down the road such as Dog Rock, Wombat Rock, the Asteroid and a few unnamed areas, all of which contain dozens of beautiful granite problems of all styles and grades. The last year has also seen visits from some of our strong northern cousins with 'Sticky' Dale repeating almost every problem V9 and over in a single weekend and Zac Vertrees snagging the first ascent of one of the most amazing lines in the area 'Zacs Arete'(aka'the Nothing') V9. North Black is situated in the mountains about 30kms south of the town of Bungendore which is just east of Canberra (you will find it on most road maps). It is an amazing setting with granite boulders of all sizes scattered throughout the forested hills. This is a place with something for everyone; slabs through to super steep, easy as they come through to desperate unfinished projects with plenty of everything else in between with most of the problems being in the below V3 bracket. It is also one of the few places where you can spend all day putting up new problems, so bring a brush!" 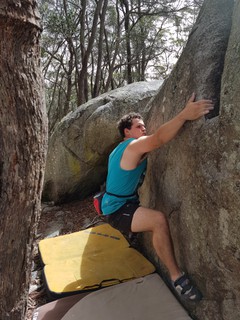 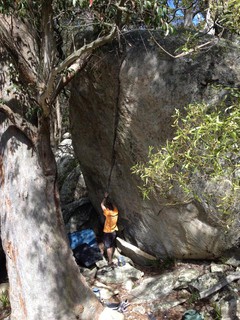 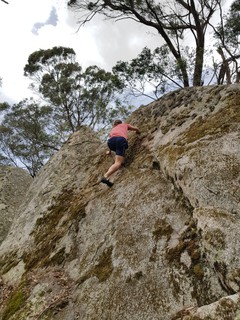 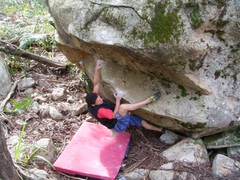 ali at The Asteroid - Pulling Gs.JPG

Check out what is happening in Black Range bouldering.