The Blue Mountains are a World Heritage listed area. The Grose Valley, the cliffs around Katoomba and much of the Narrow Neck peninsula are part of the Blue Mountains National Park which is managed by the NPWS. The Western Escarpment - where most of the climbing is - is Crown Land managed by the BMCC. While the NPWS Plan of Management nominates several locations in the National Park where rock climbing is deemed appropriate, the majority of the climbing remains unacknowledged. To maintain access our best approach is to 'Respect Native Habitat, Tread Softly and Leave No Trace'. Do not cut flora and keep any tracks and infrastructure as minimal as possible.

Driving West on the Great Western Highway, pass through Medlow Bath and bear left just past the Hydro Majestic Hotel onto Belgravia St. Continue straight ahead onto well-maintained dirt road. Just over 1.1km from where you first hit the dirt there are two clearings on the left, park at the second clearing (identifiable by a large flat orange rock at the back of the clearing, and an obvious footpad behind it).

Continue down the track at the back of the clearing (it dog-legs left near the start) for 200m until you come to a vague trail on the right (flanked by a cairn - it's the only obvious track heading off right). Head down the trail following red and white reflector markers and cairns. At the first rocky outcropping with the BLUE fixed rope, bear left (not right!) as you scramble down and continue down the hill with a rocky outcropping on your left. The track cuts right to another rocky outcropping, then makes a sharp turn left at a RED fixed rope (continuing straight ahead up the slab leads to the Archeopteryx Rap access - see below) and zig-zags down a gully past 3 more fixed ropes.

Where the trail flattens out, hug the right rock-wall and head down to an exposed ledge below an arete and a RED fixed rope. Follow the ledge to the right carefully, scramble down a prominent red dusty chute with help of another fixed rope, continue right to small chossy red cave (good for keeping packs dry). Rack up here, and traverse down and around the right rock-wall via the final BLUE fixed rope. At the bolt at the end of this traverse is the first pitch of Archeopteryx (21). Walk a further 8m along this ledge to the anchors for The Phoenix. Rap here 45m to the ground.

Via the Top Access, the area above Archeopteryx Wall (Above The Phoenix proper) can be walked to to allow a rap-in to Archeopteryx, or straight down to The Phoenix. Where the walk in takes a sharp left turn at a prominent tree and a RED fixed rope before the vegetated descent gully, head straight up over the slab, and directly down the bushy hill to the cliff (faint trail, but much vegetation). Near the cliff edge there is a red fixed rope attached to a tree, that leads straight to the rap anchors.

Overgrown and hard to find. Drive down Megalong Rd and park at the start of the Coachwood Glen 'Nature Trail'. Cross the creek. At the large boulders take the spur up the gully following cairns. At about half height head right into the gully and up to the base of cliff. Head right to the climbs. Watch out for leaches in summer.

Trad if possible, or mixed ... 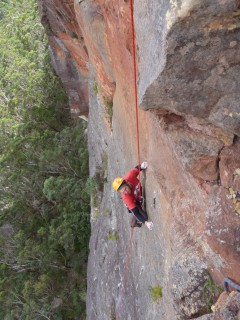 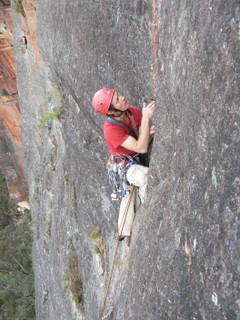 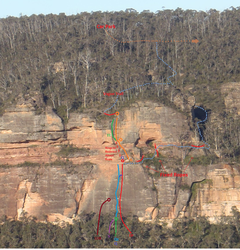 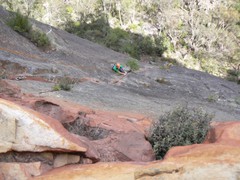 Check out what is happening in The Phoenix.