Areas with some big time air and big time sun. Most routes at this crag get sun from dawn until about 4pm in winter, so if its sunny you definitely want cool air temps or a breeze. The east-facing walls (e.g. Regular Route, Orange Jam) are shady after midday. In summer, all routes are in shade after 3pm.

The Blue Mountains are a World Heritage listed area. The Grose Valley, the cliffs around Katoomba and much of the Narrow Neck peninsula are part of the Blue Mountains National Park which is managed by the NPWS. The Western Escarpment - where most of the climbing is - is Crown Land managed by the BMCC. While the NPWS Plan of Management nominates several locations in the National Park where rock climbing is deemed appropriate, the majority of the climbing remains unacknowledged. To maintain access our best approach is to 'Respect Native Habitat, Tread Softly and Leave No Trace'. Do not cut flora and keep any tracks and infrastructure as minimal as possible.

From the carpark/campground, head left (NW) and find the previously well-worn (but since the fires now a bit faint) track through the scrub. Follow this for 100m to a short descent gully (cairned, be careful not to miss it). From the base of the gully scramble, head left (west) to the Date with Density abseils, or right (east) to Red Edge/Parched abseils.

For Red Edge/Parched abseils, after turning right, head straight downhill for 30m. The first anchor you see is for Parched (new rings on a ledge to your left), with the Red Edge anchors somewhat hidden 10m right of the parched anchor (refer to topo photos of this area for more details). This buttress is steeper and the abseils are more difficult.

Takes about 1hr 15min - 1hr 30min, is tricky to navigate, and somewhat sketchy (but at least you won't need to carry a 2nd rope up the climb with you!). From the carpark, descend the Blue Gum Forest track until a prominent free-standing pillar becomes visible on the left. From the bottom of the adjacent steel handrail, continue down the stairs for 50m (or literally 100 manufactured steps (wooden or cut-rock)... count 'em as you go!). Turn left off the trail here, and parallel 10m under the cliffline heading somewhat downwards (past Blue Gum Track Crack) looking for copious cairns or the odd pink marking tape.

When you reach a gully (with dense tree vegetation in front of you), make your way UP to the main cliffline, and continue following directly along the base of it. Stay at generally the same height (following cairns) along sketchy loose ledges (be careful!) for several hundred metres, picking the safest path amongst the maze, scrambling through the odd choss-cave, and carefully negotiating a few scary checkpoints.

When you reach the first set of carrots, you're at Red Edge, with Julian's tagged project soon after, and Stiletto, then Regular Route a bit further along - you may need to drop down a few metres to get from Stiletto to Regular Route past the wet corner but it all works. Keep going to the rest of the routes.

Although sport climbing is well entrenched as the most popular form of Blueys climbing, mixed-climbing on gear and bolts has generally been the rule over the long term. Please try to use available natural gear where possible, and do not bolt cracks or potential trad climbs. If you do the bolts may be removed.

Because of the softness of Blue Mountains sandstone, bolting should only be done by those with a solid knowledge of glue-in equipping. A recent fatality serves as a reminder that this is not an area to experiment with bolting.

If you do need to top rope, please do it through your own gear as the wear on the anchors is both difficult and expensive to maintain.

It would be appreciated if brushing of holds becomes part of your climbing routine - do it with a soft bristled brush and never a steel brush!

The removal of vegetation - both from the cliff bases and the climbs - is not seen as beneficial to aesthetics of the environment nor to our access to it.

However, the fast growing scrub can conceal walking tracks in mere months, making remote and less popular crags slightly more difficult and fun to navigate to. Some appropriately discreet pruning is a far better alternative then track braiding (which causes far more damage).

However, do so only on Council land and definitely not in the National Park. Remember, to maintain access our best approach is to 'Respect Native Habitat, Tread Softly and Leave No Trace'. Do not cut flora and keep any tracks and infrastructure as minimal as possible or risk possible closures. 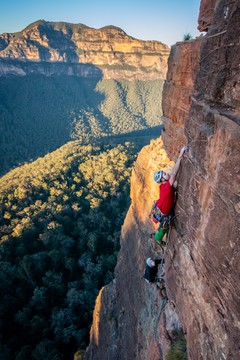 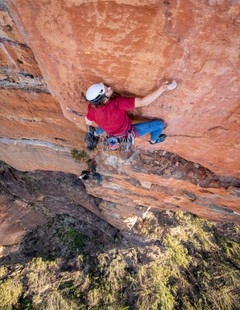 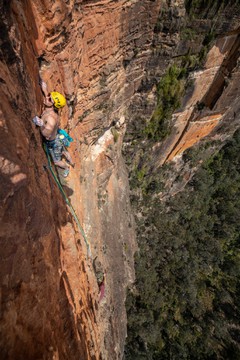 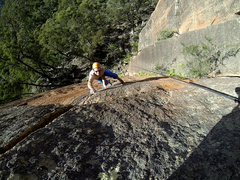 Check out what is happening in Perry's Lookdown.