Please note that we use cookies to improve the use of this website. By continuing to browse the site, you accept theCrag Site Usage Policy I Agree
Australia
VictoriaVic
North East
Mount Buffalo

Extraordinary climbing on alpine granite of all grades on everything from boulders through single pitch crags to multi day aid affairs on the North Wall of the gorge.

Mount Buffalo consists of both a large gorge and an alpine plateau.

For those staying for long periods at Mt Buffalo, there is Telstra reception throughout the majority of the national park, but limited Optus coverage found at the carpark for the Gorge and the Horn.

Varies from short to long, flat to steep walk ins or abseil approaches both short and long.

Paid camping is available at Lake Catani on the plateau and can be booked online (http://parkweb.vic.gov.au/explore/parks/mount-buffalo-national-park/things-to-do/lake-catani-camping-ground) or over the phone via Parks Victoria. Beware, the campground is quite expensive at $50/night. Of course you can also bivvy on the walls of the gorge during multi day ascents, or just for the fun of it. Remember to note your intentions in the climbers log at the Park Info shelter near Bents Lookout.

Free remote camping is available on the Plateau at Rocky Creek and Mt. McLeod via several km walks.

Free camp sites are available in State Forest in the nearby Buckland Valley as well as other nearby forests.

Trad climbing rules here! Bolts are a last resort! Most of the major aid lines can be done clean using modern gear unless noted. Freeing of aid sections should probably attempted as trad before resorting to fixed artificial protection.

Early Aboriginal history regarding Mt Buffalo is somewhat sketchy but the Yiatmathang and Minjambuta mobs regularly trekked up to the plateau in the warmer months to harvest Bogong moths.

The first non-Aboriginal sighting was made in 1824 by the explorers Hume and Hovell. In 1853 it was climbed by botanists von Mueller and Dallachy.

In 1910 The Chalet was built, along with the dam wall that created Lake Catani. The first ski tows were built in 1936.

Rock climbing started in the 1930's with a few routes at The Cathedral and the Wall of China though records are almost non- existent. During the late '40s and '50s several visits were made by Melbourne University Mountaineering Club groups.

Geoff Shaw established climbs at The Cathedral in 1959 and 1961. Not much of note happened until a very young John Ewbank visited for the first time and claimed the first true ascent of The Cathedral pinnacle with Maharajah with a number of aids. He would return in 1968 to claim the first free ascent of the line as well.

*Based on the 2006 Mt Buffalo guide by Lindorff & Murray. 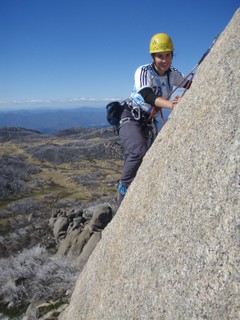 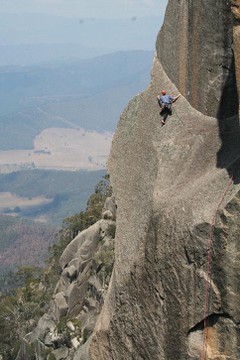 Check out what is happening in Mount Buffalo.