The Glenreagh area (about 45 minutes NW of Coffs Harbour) offers an extensive sandstone escarpment with more than ten established crags and a variety of climbs from cracks to steep sport routes.

The Glenreagh area offers an extensive sandstone escarpment with more than ten established crags. It is possible to climb in the area year-round (by chasing shaded cliffs) but the best temperatures are from about March to October.

A brief summary of the crags near Glenreagh is as follows:

Generally, there are three main access roads from the Pacific Highway. Which one to use depends on where you are approaching from. Try driving out one way and back another for the full experience.

The finer details of the approach to each crag are described separately.

The nearest bush camping is at the parking lot for Wonderland. Otherwise, the towns of Coffs Harbour, Woolgoolga or any of the other coastal villages offer everything from caravan parks and backpackers hostels to five star resorts. The ability to combine a combine climbing with a beach holiday is hard to beat.

Climbing ethics in the Coffs Harbour area generally follow those of the rest of Australia. The sandstone often offers solid, natural protection which should be used instead of fixed protection where possible. Tape, ribbon, or something similar tied around a bolt or inserted in the route will indicate an incomplete route. Please respect these routes as projects until the marker is removed.

The first recorded climb in the Coffs Harbour area was Cold Tap (14) at the Fun Parlour, which was climbed by Larry Dixon, a dreadlocked, whitewater rafting guide from Ulong, in about 1982 . Throughout the '80s Larry, his brother Dicko, Ian Allen, Al Stephens, Richard Thomas (the long, tall Texan), Mark Spence, Graham Stewart, Wade Fairly and Richard Falls continued the gradual development of the small but fun crag.

Surprisingly one of the other areas visited in those days was 'The Scones', where 'bouldering' consisted of soloing high ball cracks and faces. Being about 20 years before the introduction of crash pads, bouldering was a lot more serious than it is these days. No boulder problems were ever recorded in this era (as it wasn't really climbing...).

Around that time, Larry also found and named the Godzone (originally called Gods Cliff). He so named the crag due to a large crucifix and altar he found under the large overhang. Gavin Dean and Al Stephens added a few routes to the area but didn't record them.

In 1989 Gavin Dean got serious about putting up new routes and Coffs climbing was about to get a major boost. Gavin started at the Fun Parlour, quickly claiming the first ascent of 12 routes including The Raw (21) and 'Rum and Coke' (22).

Wonderland was founded in 1991, by Gavin Dean and company and the area was used as an abseiling school for a couple of years.The potential for rock climbing was soon realised and 25 routes were put up by Gavin Dean, Keith Bennett, Allan Stevens, Dick Curtis and Ed Sharp during June and July of that year! By the end of 1993 the area had 56 routes. Rarely has the development of a crag been dominated so greatly by one person with Gavin Dean being either leader or seconder in 44 of the first ascents.

The first printed guidebook to the area 'A Climbers Guide to the Mid-North Coast' by Gavin Dean was released in 1994, covering Fun Parlour and Wonderland.

1995 saw the 'rediscovery' of Sherwood rock when patchy weather had turned Bruce Jones and Danny Rose away from the Fun Parlour which is just a few minutes South West. Wonderland also saw some serious action that year when Ben Christian and Gordon Low (from Armidale) came down the mountain and established ten routes harder than grade 25. The prototype climbing walls they had built (which later became the climbing hold company 'Uncarved Block') was obviously working at raising the technical skill level, especially on overhanging sandstone. The top grade that year got bumped to 26.

1996 saw the discovery of Fort Knox when Ben Christian and Jeff Gracie were on another winter climbing break from Armidale to visit Wonderland. After quickly realising the crags potential they met up with he rest of the Armidale crew and moved camp from Wonderland to the infamous ‘Camp Butthole’ (where the top car park now is but camping is now banned). The first route to be completed was Gordon Lows 'Missing Monkeys' and by the time the dust and smoke settled at the end of the week another 20 routes had been completed. The top grade was pushed to 27 that year with Ben's ascent of Agent Scully. Matt Kelly also discovered Solinari sometime in this era.

Soon after, the third guide to the area was prepared by Sally Goode called “Climbing Guide to Coffs Harbour”, mainly to reflect the frenzy of development at Fort Knox and the adventure routes of the Nymboida Gorge.

Also around that time, Mal Drummond, Bruce Jones and others revisited Godzone, put the first route up at Never Never and Music Hall and E. Houton also upped the top grade to 28 with his ascent of 'Shit Chick' at Wonderland although the date and details of this ascent are a mystery. Apparently he had just broken up with his girlfriend and was taking his anger out on the rock...

Bunyip was found by Tristan Ricketts & Paul Daniel sometime around 1999. Unfortunately they only got a few routes done before Tristan got a job and moved to Sydney. Luckily Marc Bailey and Terry Bernutt were there to finish the job.

2002 saw the guidebook move into the digital era with the development of Bruce Jones website www.verticalmania.com.

From 2002 to 2005, Marc, Terry and Peter Higgs established some of the best and longest routes in the area at Never Never and Bruce Jones established Kilowatts.

The Scones was 'rediscovered' by Ben Whittaker and Artie Schultz in the mid 2000's, who bought a modern bouldering ethic to the area. They established around 30 problems from short and steep through to high and scary including what is probably the best boulder problem in the area 'The Kremonator' (V5).

The Waglands moved into the Area in 2009. The father and son team of Dave and Nick bolted a number of hard projects and routes around the Motherlode' area and elsewhere at Fort Knox. Nick also dispatched the abandoned project at Wonderland, establishing 'Defence Mode' (27), at age 16!

In 2010 Steve Hawkshaw and Artie Schultz established Obscurity Wall and Steve and Brian Cork put up the first recorded routes at Waihoo after getting rained out of climbing day and deciding to bush bash instead. It turns out Marc Bailey had been secretly sniffing around there too.

In 2011 Steve got a new drill and gave Fort Knox a second wind. In a (relative) spurt of new route activity Steve and his cronies unearthed a number of hidden gems, many of which were moderately graded and had been overlooked amongst the harder lines.

In 2012, Allan Ezzy finally sent an abandoned project to establish the hardest line at Fort Knox 'Monkey See, Monkey Do (28)' and Steve re-discovered the Twilight Wall (also at Knox) which had somehow been mostly overlooked even though it is about 50m from the parking lot!

2013 continued to see the addition of routes at many established crags (mostly Knox and Waihoo) as well as the beginning of the replacement of many of the aged bolts on the most popular routes, thanks to the dedication of Steve.

There has also been a lot of unrecorded development in the Glenreagh area over the years as is evident by the discovery of old bolts and pitons in the search for 'new' routes.

Note: Please feel free to edit or fill in the blanks of this history. 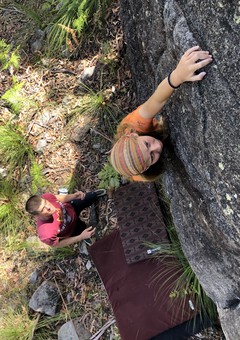 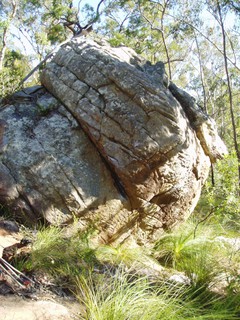 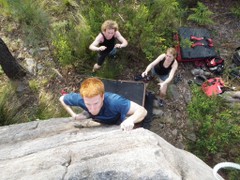 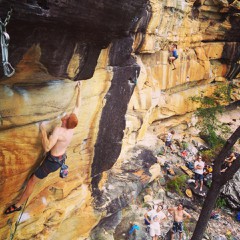 Alan Ezzy at Fort Knox - Alan and Amy at Knox.jpg

Check out what is happening in Glenreagh.