Bondi is a big and serious crag for Sydney standards. It doesn't have much in the way of easy routes and has difficult access to boot. Despite this it's definitely worth a visit since the rock on the main wall is some of the best on the sea cliffs. Some recent rebolting has made the best of the routes leadable again.

The crag is located a few minutes drive past the northern point of Australias famous Bondi Beach and can be found directly east of the intersection of Wallis St and Military Rd.

Park as close to the Bondi Golf and Diggers club house as you can. Grab your gear and make your way around the southern end of the golf course between the greens and the wooden fence line. This will bring you out to the edge of the cliff where you'll find a large rock platform you can walk out on to. Head north of the rock platform following the cliff line and the goats trail through the knee high grass for approx 20 meters where you'll find an overhang/cave. This is the top of the main wall and where most of the action can be found.

Bondi is truly an amazing place to climb so avoid walking across the fairways or greens as we don't want to annoy the golfers and have our access banned, or worse, have a golf ball hit a strolling climber on the noggin. FORE!!!

The original descent gully is down the aptly named "Black Filth Couloir" just north of the main wall. Many people take one look at it and rap in instead. Rapping in is much safer, enjoyable and quicker. There are 2 sets of double bolt belay's spread out over the top of the main wall. One set at the southern end, one in the middle and a lone single bolt at the northern end. There's also a set of double bolt belays about 15 meters north of the main wall which are the anchors for Arapiles. All anchor points require double 50m ropes, although it's probably better to fix one rope, rap in and lead out on a second. All carrots are in excellent condition.

There's also one set of double bolt belay's on the southern end of the rock platform you first come across when arriving at the crag. These bolts are in excellent condition and are there for an unknown project.

If you and your climbing party decide not to rap in or climb out there's another descent gully between the grass and the rock platform south of the main wall. You'll find a single ring bolt about 15 meters down into the southern descent gully on the left hand side. This is ideal for setting up an access rope which is highly recommended when either going down or coming up this access trail. From the bottom of the southern access gully it's a cautious walk north back to the main wall.

A few people have said "I should've brought my swimmers along". NOT A GOOD IDEA. The ocean has easy access at this crag and as tempting as it is you don't want to risk being smashed against the rocks by the surging ocean. The Westpac rescue helicopter is not the best way to exit a crag. Remember folks, Australias most famous beach is only a 2 minute drive down the road from here so best to slip slop slap and go swim between the flags.

Climbs are described left to right facing the cliff.

Chalk up, climb on and live the dream! 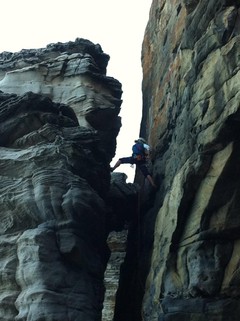 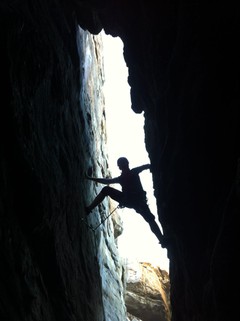 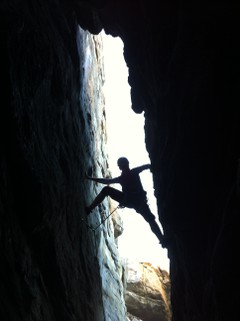 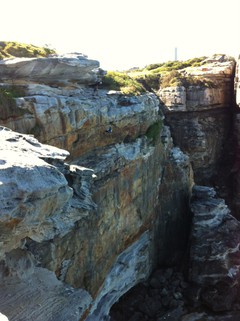 Check out what is happening in Bondi.