PLEASE READ ACCESS ISSUES SECTION. An excellent metro climbing area that's nice and close to the city with a quick approach, and some of the better rock for the Eastern Suburbs.

Most routes are sport - on a combination of bolts and rings. However like most of the sea cliff climbs a lot of bolts are rusted and manky so other protection may be required. There are however still a lot of climbs with bomber bolts, and great anchors so top roping is fine for most routes.

There are two cliffs to climb, one facing north and one south. The south wall can be quite hot during the day with full sun but makes for a warm crag on a sunny winters day. The cliff itself can be quite damp after rain so leave for a few days giving it a chance to dry.

(December 2019) Access to this area is in jeopardy! Following a letter from ACANSW to Waverley Council it would appear that climbing is not prohibited and that council rangers are respecting climbers (and slackliners) who are behaving responsibly but will intervene if they believe that non-climber members of the public are putting themselves at risk (i.e. crossing the fence line to take photos or selfies).

Until such time as ACANSW receives clarification from Council, if you do choose to climb here please ensure you do not linger at the cliff top and wear a helmet to distinguish yourself from the general public.

If you are approached by Council Rangers (who are pretty accommodating) please follow their instructions and report any interactions to Sydney Climbers Facebook group and ACANSW.

Police attend more than 50 suicides a year along this coastline. Don't create a false alarm.

Follow Old South Head Road from Bondi Junction Towards Vaucluse until you see the turn off for Diamond Bay Road just after the bowling club. Turn either left or right at the T Intersection and follow the road around to the parking area. Park on the south end of the car park.

Both the 380 and 389 buses (from the city and Bondi Junction) have bus stops just near the crag.

You have two options to access Diamond Bay crag.

To rap in hike your gear to the top of the North Wall, set up some anchors and abseil in.

To scramble in head along the board walk and after the few sets of stairs jump the rail and head left down the cliff. Work was done on the 15th August 2015 to improve this access. The old ladder was removed and a brand new one was installed. The new ladder has been bolted and glued at the base and top of each leg. New solid rungs have been glued into the sandstone with the old rungs acting as back ups. New rope anchors have been installed at the top of the access and mid way. A new access rope has been installed with permanent rope protection in place at the top.

A number of climbs feature chipped holds, as well as glued holds. 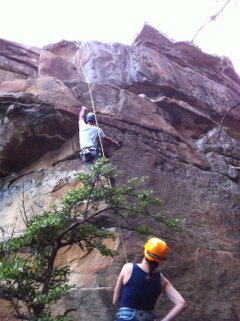 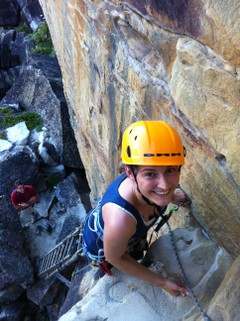 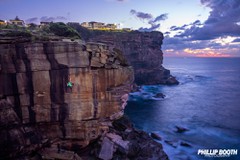 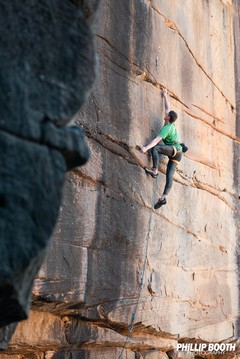 Check out what is happening in Diamond Bay.