Evans Crown Nature Reserve (“Tarana” after the nearby hamlet of the same name) is a small (425ha) nature reserve in the Fish River grazing country on the Lithgow side of the Blue Mountains. It consists of a forested outcropping of granite domes and tors – and from a climber’s perspective, is the nearest quality granite climbing to Sydney, and a welcome change from the sandstone cliffs of the Blue Mountains. There are more than 120 established routes here, mostly dating back to the 1970s and ‘80s, often friction climbing on slabs, faces and steeper boulders and features. The three-dimensional climbing, sometimes heady runouts and beautiful setting all contribute to a unique climbing experience.

Evans Crown Tarana is a Nature Reserve administered by the NSW Office of Environment and Heritage. As a Nature Reserve (and unlike National Parks) the primary purpose of the administration is preservation of natural and cultural values, NOT recreation. While rock climbing is noted as a recreational use in the 2009 Plan of Management (this can be downloaded from http://www.environment.nsw.gov.au/parkmanagement/EvansCrownMgmtplan.htm) it is not officially encouraged, and if the OEH believe the impact of climbing is detrimental to the natural or cultural values of the area, it can and will be banned.

The Parks and Wildlife Service requested at one stage that all climbers register their intention with them prior to climbing – this no longer seems to be the case. However, there is an existing ban on new routes, brushing or cleaning existing or new routes, no “gardening” or disturbing vegetation, no marking routes, and no camping or fires in the Reserve. No new bolts may be placed, and technically re-bolting is also forbidden.

So – in addition to the usual “Leave no Trace” guidance, please make every effort to minimise any signs of climbing activity in order to preserve our precarious access to this special place.

From Sydney drive over the Blueys on the Great Western Highway towards Lithgow. As you reach the outskirts of Lithgow, turn left at the petrol station onto Magpie Hollow (Rydal) Rd towards, and then past, Lake Lyell. After about 10.5km, turn right and then almost immediately left at a T-intersection onto Sodwalls-Tarana Rd. Follow this road about 10km through Sodwalls until turning sharp left onto the dirt Honeysuckle Falls Rd.

Head up the well-formed track for about 20 minutes until you hit the signposted intersection at the top. The unformed track to the left will immediately bring you to the front of Deckout Buttress.

The Tarana Hotel has rustic cabin accommodation and basic meals - see http://www.taranahotel.com.au/ The more major township of Lithgow is only a short drive away with plenty of accommodation.

Free camping is available at Flat Rock campsite on the Fish River about 15 mins drive from Evans Crown - see http://www.australiancampsites.com.au/index.php/component/content/article?id=267:flat-rock

Given the restrictions on new routes, brushing and bolting, new route activity is limited to trad climbing, and the easy lines (and the hard ones!) have long ago been developed, for the most part. The casual visitor is probably advised to stick to the established climbs, there are plenty to go around. Many climbs in this guide are listed as "Sport" in that they are bolted climbs with no natural gear required (or available) - many of these are truly "sporting" with old-school runouts. Some of the "Trad" climbs have little or no protection, and were soloed on FA. Please be careful - top roping is often possible and often the only way to adequately protect a route.

Climbing at Tarana began when Dave Tanner, an old climbing partner of John Ewbank’s, visited the place in 1971 with people from the newly formed Bathurst climbing group. They did Tanner's Leap (13), the ﬁrst recorded route here and the original route to the summit of Evans Crown. Some early experiments with bolting probably date back to this initial period, to - as the weird piece of ironmongery on top of the Crown and the mysterious series of boltholes up the chimney of Tanner's Leap testify. Other early routes by this group include the classic Barad Dur (13, M1), put up by Bob Douglas and Dave Tanner in 1973. In true guidebook tradition, the early history is very vague. However, it seems that the local climbers took Joe Friend and his companions Bill Watson and Pete Blackwood there sometime during 1973 and that, in various combinations, they did quite a few of the more obvious, easier crack routes.

The place lay dormant for a few years (or at least no more new routes were recorded), the only activity being Joe Friends ﬁrst free ascent of Barad Dur at 18 in 1975. Around 1978/77 Friend lived in the district and initiated a revival of interest: many line new routes were done at grades up to 21. The main activist other than Friend was the young Mike Law, who led the nasty cracks, Chain Mail Crack (21) and Brain Savage (21) - the hardest routes here for quite a while—and the rather bold arête, Born Crazy (20), which he did with Andrew Penney. With Friend, Law also added the classic crack route, Spot the Brain Cell (19), and with Friend and Ben Ewald he did the first route up the main face of Googolplex Crag—2001 Bilbo Baggins (18). Friend led Sorcerer's Apprentice (16) as well as soloing many routes, the best of which was Shark Fin Special (15)—almost certainly from this period though exact details are long forgotten.

In 1977 Joe Friend brought out an unbound guide to the area which described about 35 routes, but descriptions and historical information were sketchy. What may have been done between then and 1987 has been lost. The cliff went out of fashion not long after the appearance of Friend's guide as the new age of bolting wall routes in the Blue Mountains began with a vengeance, so it seems safe to presume that little more was done until recently.

The next recorded activity was in February 1987. John Smoothy (Crunch) was becoming a little bored with the Blue Mountains, and took former New England granite climber, Mark Colyvan, to the cliff. The pair were amazed at the potential for bolt-protected slabs and walls, and quickly began work on new routes. The first bolts went into the short slab, Bloodbath (20), led by Colyvan, and the pumpy crack, Belly Acres (23), by Crunch. Giles Bradbury tagged along on the latter and got into the act in his own right the following week with a newly acquired power drill on the classic Dr Martens Boots (21) and the desperately smooth slab, Roller Disco (23). The same day, Colyvan completed work on Six Days on the Toad (21) and led it, and Crunch added Sudden Impact (21) to Deckout Buttress, where he had done Splat (18) and Kersplat (17) during the preceding week. Crunch’s enthusiastic burst continued. The main face of Googolplex Crag yielded This 0ne‘s For Evelyn (22) and Desperately Seeking Evan (20), and on the boulders on the ridge he did Maverick (21)—yet another good, bolt protected wall.

Meanwhile Colyvan had been preparing for the classic two-pitch arête, The Howling (23), which he did with Geoff Robertson during April. ln September that year, visiting Queenslander Scott Camps did Scabby Lizards (21) on Deckout Buttress, and Crunch added Madonnas (19) nearby; both are good, slabby wall climbs. Towards the end for the year, another former New Englander, Paul Bayne, was introduced to the area. Over the remainder of the year and into the next he was to do some significant new routes, including the middle-grade classic, Fuzzy Navel (18), Shelf Life (21), and the shorter wall route, Small Pox Wall (19). in early 1988 Mark Colyvan climbed the prominent dyke on Crown Buttress to give Sea of Heartbreak (22), while Jo Monaghan and Fiona Lumsden put up the beginners’ classic, Passionate Pleasantries (14), on Googolplex Crag. In January 1988 Colyvan published a Photostat guide containing about 60 routes.

Shortly after this, Paul Colyvan (another former New Englander) was taken to Tarana and added a long-awaited second pitch to Desperately Seeking Evan—the rather scary Finger Tight (23). Mike Law also sprang back into action at about this time. Hoping to redeem himself for past deeds in cracks, he added Ice (23), Spouse (26), and Twitching for Jesus (24) to the growing list of slab routes here. Meanwhile, Joy Fletcher put up Your Neighbourhood Bolter (16) on Crown Buttress.

By this time Tarana had become a very fashionable place to be (and be seen). Everyone who was nobody was there with Lycra tights, power drill and adolescent ego, but few had vision enough to add any significant new routes to the crag. One exception was Gordon de Lacy, who added Ride of the Valkyries (24) to the Neurone Circuit and a few months later did a classic two-pitch 23, Mr Sheen, on Googolplex Crag. David Haines and Mike Ellims added a few worthwhile routes such as Optem Bop (16) (by Ellims) and Bury Me Deep in Love (23) (by Haines), both in the Goog Gap area. The only other signiﬁcant addition in 1988 was Crunch's classic on Googolplex Crag, A Ticklish Affair (24).

During 1989 the Mt York Principle (between any two routes there is potential for at least one more) was applied to Deckout Buttress to squeeze from it every route possible. in the process, existing routes were bolted and brushed, presumably because those responsible were either too lazy to find out whether these routes had been done before or too stupid to realize that bolting other people's routes wouldn't earn them a place in the guide.

Leaving all that ugliness aside, there were some good new routes done in 1989. Deckout Buttress acquired The Owl and the Pussycat (21), put up by Andrew Penney in January, and Polkagris (21), by Carl-Joan Jagusch in February. Paul Colyvan did the route to the right of The Howling's second pitch and called it Rubber Nuns (26). Damien Taylor managed a couple of good additions to the Neurone Circuit—Men of Vision (22) in February, and High-rise Wombat (23) in April. in March, Mike Stacey succeeded on Thrashing the Mullet Gun (22) and Andrew Penney did Laughing Boy Morris (21): both are on Googolplex Crag. Later in the year on the same crag, Rick Stiles did Rene's Ethical Neutrality (20) and Andrew Penney (who had been busy here much of the year) did God Help the Hash House Harriers (21).

At the time of writing there were 112 routes at Evans Crown, 52 of them added in the two years since the publication of the last guide.

[Transcribers note – above history transcribed from Mark Colyvan’s “Evans Crown Tarana – A Rock guide” published by Wild Publications, 1990, with permission from the author. Due to environmental sensitivities and a ban on new bolting, very little new route development has taken place here since then – that anyone has recorded, anyway. Please see “Access Issues” section before considering any new route activity.]

No dogs No camping No fires 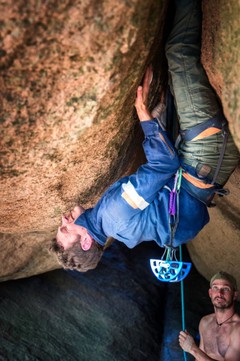 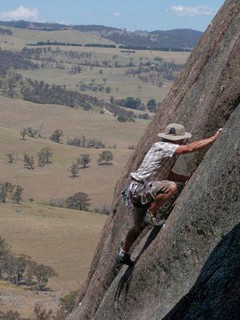 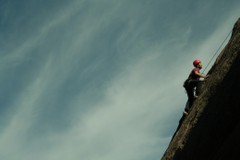 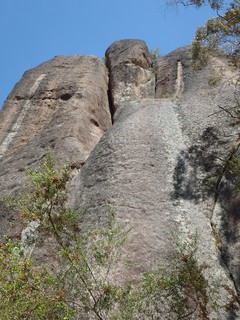 Check out what is happening in Evans Crown Tarana.