The Secret Cave All Sport climbing 63 routes in area

Always shady Dry in the rain

An intoduction by Cameron Fairbairn

For years, the minions of the Maharaji guarded Ivory Rock from the prying interests of passing climbers. This huge unclimbed horseshoe buttress is visible from the road as you travel to Frog. For us it was always the beacon for Mt Flinders. Passed jokingly around the campfire, generations of 'Queensland' climbers have heard stories of secret cults guarding this cool formation. I remember years previously stopping at the "conference" centre to be turned away by security and being told to go to Mt Flinders further up the road if I wanted to climb something; in retrospect I should have listened to them then! In the last year we've been chased down and photographed, abruptly refused entry, and outright ignored by thousands of the Premies cultists when we questioned them about their gatherings. Visit ex-premie.org for the full story of this shady organisation. Anyway, just don't try to talk to them, they get very upset.

Mt Flinders' actual climbing history began very late, it wasn't until 2000 that '80s guru Kim Carrigan started developing a buttress on the summit ridge. Kim established six steep, sport climbs graded from 21 to 26 and a potential grade 29 project. Now, when we say steep we mean 'Queensland' steep; the wall is about forty metres high, ten degrees overhung and is north-east facing, so gets mid-arvo shade. After these routes were revealed in the pages of Rock, more climbers started checking Flinders out and in early 2001 Ross Ferguson started developing another wall on the opposite side of the ridge. Ross established six or so mixed routes of moderate grades, but on one occasion returned to find access to the mountain closed. The access gate locked and signs of indefinite closure due to remote area access surveys. What? So Ross did the final trek in for his gear and decided, disheartened, not to return. The reason for the closure, we believe, was due to an erosion hole forming in the main walking track about two-feet round. The new trail now bypasses this hole which, amazingly, is an erosion point into the back end of our recent major discovery, 'The Secret Cave'.

During Mt Flinders' closure, climbing was mostly forgotten. Then early this year Glen Foley called me to say he'd done a recon up to Kim's wall and had spied some new lines and would I be interested. He also told me about a rumoured cave some friends of his had stumbled upon five years earlier. We went there for Kim's wall, but when we found the cave all else was forgotten. 'The Secret Cave' is sixty metres high, but from twenty to fifty metres overhanging with the main wall being about twenty metres height at 60°- 80°. We had found the steepest terrain in QLD, or I should say rediscovered. We found a line of old 8mm hardware down the right wall of the cave that belonged to Frey Yule. We think he checked out the cave about five years previously but then moved interstate. The cave is SSW facing, so no sun all year round and only a 40min drive from 'Brisbane'. Unfortunately, there is also the 2.5km, 40min uphill walk in as well. The rock is solid volcanic trachyte with formations uncommon in Queensland; it's a mixture of fused blocks, huecos, crystallised slopers and hard crimps - the holds can be quite sharp. Some of the easier routes like 'The Nightmare of Milky Joe' (23) and 'Never Ask the Moon' (22) are super-fun cut-loose jug fests.

Early in the piece, Glen established 'Wet Jigsaw Puzzle' (25) a short pump fest that climbs out of the steepest part of the wall. To add to this he climbed 'King of the Mods' (29), adding to only a handful of 29s in 'Queensland'. Then the numbers rolled, I freed my project after my food was spiked 'Like a Man on Pepperoni' (28), possibly the steepest climb in 'Queensland'. That was until Glen equipped his, an 80° blank arête project, 'A Space Odyssey' 25m ? (all we know is its significantly harder than King of the Mods). At the time of writing this article, all the moves go; Glen is just contemplating the need to clip in on the crux low on the climb.

'The Secret Cave' consists of two developed areas: the steep main wall and a right hand wall which, although not as steep as the main wall, offers some challenging climbing. 'Terminus of Desire' (25) climbs from under the large undeveloped overhang. This route will be used to access the steeper upper wall which has the potential for a couple of super hard routes. With all this new development Ross returned to develop what he hoped would be a nice easy sub-20 warm up. He ended up establishing 'Finger Tips and Mountain Tops' (23), an intricate crimp-fest climbing above the lip of this right-hand buttress. Ross then established 'Song and Dance Man' (27) a steep juggy start into a hard crimper sequence. Glen the power monkey campused his way to glory on Backstroke of the West (26) while another buddy of ours Antoine Moussette battled scorpion-eating spiders on 'The French Connection' (27).

There is still so much more to do. Hard unclimbed projects, the undeveloped upper wall and the central cave section as well as some creative batman starts. 'The Secret Cave' has proved to be a valuable asset to 'Queensland' climbing, not only in the unique steep terrain, but also in the addition of ever increasing harder sport climbs in 'Queensland'.

When to go: All day, any day. Providing you can handle the heat on the walk-in.

Please respect the local roads and residents, leave gates as you find them and do not leave any gear or rubbish in the cave. Tread lightly and stick to the trail on the way to and from the crag.

Drive: From Brisbane head out on the Centenary Highway, turn south at Ripley Rd. After about 10km this turns into Undulla Rd. After a further 7km turn right onto Mount Elliott Rd. On Mount Elliot Rd you eventually come to 2 sets of gates. Go through the gate and close them behind you. At the second set of gates, the right one is clearly someone's house, take the left gate. Drive to the end (bumpy dirt road) and park somewhere without blocking the final locked gate or the road.

Walk in: Follow the fire trail for 5 mins, to an intersection with a yellow SFT marker. Turn left (uphill). Soon you arrive at another yellow SFT marker. Go left again onto the faint trail. Follow through the trees to a clearing and Head left immediately. You should be able to follow this now well developed trail all the way to the crag without much trouble. At the small gear cave, scramble up the rock just left where the log leans against the wall. 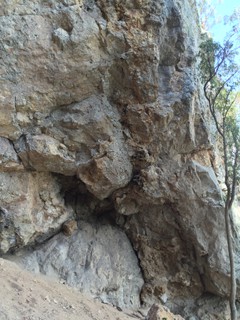 Check out what is happening in The Secret Cave.