Please note that we use cookies to improve the use of this website. By continuing to browse the site, you accept theCrag Site Usage Policy I Agree
Australia
New South Wales and ACTNSW & ACT
Northern Tablelands
Gara Gorge
Eastern Gara Gorge
Yellow Wall

Yellow wall and the other cliffs on the eastern side of Gara Gorge have some of the best lines in New England. The granite on this side of the gorge is much steeper and seems to be much more juggy and featured that the characteristic 'Slabs' of Moonbi and the Eastern side of the gorge. The cracks are still there (and many of them still await first ascents) but the potential for steep bolted walls is astounding, many of them multi-pitch. With an eye for a line and willingness to do a little bit of cleaning you could have your name scrawled across the pages of the next guide. Get to it!

The access is on private land (the property of Silverton). As of 2009, the owner was Richard Waters (02) 6775 3755. He was fine with, and even encouraging having climbers driving through his property. He just asks that you phone ahead. As in all rural areas, leave gates as you find them and drive slowly through livestock. If you see anyone at the properties make sure you stop and say G'day. Future access depends on good relations with these fine folk.

To get to Silverton take the Waterfall Way east for about 17km from the outskirts of Armidale and turn right onto Silverton Road. Go 5.3km to an intersection and continue straight ahead. Go 2.2km to a cattle grid, shearing shed and gate. Continue another 500m to another gate. Go through the gate and turn immediately right into the field (a faint trail). Drive or walk down past the dam and follow the gully until it widens out and there is another dam near the gorge rim. Cross the gully and drive up onto the knoll. There is a metal gate to the gorge rim. Go through the gate, admire the incredible view and the bush bash down the gully.

Basically, the climbers of Armidale are a pretty laid back, free thinking group and as long as you don’t go out of your way to put people’s noses out of joint you’ll be amazed at how helpful they can be. The quickest way to piss people off is by ripping off projects. There are a few devoted locals making an effort and putting up quality new climbs. A lot of time, hard work and even money goes into their endeavours (cracks can be projects too) and there is too much unclimbed rock around to justify destroying someone else’s motivation. Any routes marked as such or not in the guide should be left alone. The simple courtesy of asking first may save you from being stripped naked and being staked out for the crows to pick your eyes out. If putting up new routes is your thing then please feel free. The only request is that you avoid placing hangers or conspicuous bolts around the Gara Boulders as we are already viewed as an environmental menace by the NPWS - bolting in National Parks is actually illegal.

Climbing at ‘Yellow Wall’ was part of the beginning of a new era for climbing in Armidale. It was the beginning of the discovery of many steep granite cliffs in ‘Gara Gorge’. Prior to this time, climbing was, except for the slabs of ‘Mt. Yarrowyck’, limited to waterfall faces and their adjoining cliffs.

In April 1975, Al Stephens and Trevor Gynther walked down the Gara River, below the Blue Hole, looking for new cliffs based on information given to Al, by talented young local climber Bob Killip, that there were big cliffs in the area. The pair found and climbed a route on nearby ‘Nettle Buttress’, 'Serenity' (17). On the long walk home that same day they decided to check out the large wall glowing in the sun on the opposite side of the gorge. This, of course, was ‘Yellow Wall’. The potential of the wall was obvious. Later, easier access was found by driving across farm land. This led to Yellow Wall's popularity.

The scene at that time consisted of Bob Killip, Rob Dixon, Brian Birchall, Jill Kellman, Phil Prior and Al Stephens. Everyone was eager to get into the new routes. However, initially new routes came painfully slowly. Eventually all the above climbers were involved in new climbs, but the best of that year was Bob Killip's 'Gnome Tree' (19). Bob initially graded the climb (20), Armidale's first 20!

Next year, 1976, Bob invited Kim Carrigan and Gooney to Armidale to confirm the grade. To Bob s horror and disgust, Kim thought that it was about 18! Today it's considered a soft touch 19. On the same day as the infamous down-grading, Rob Dixon and Al Stephens aided 'Pin-Up', destined to become one of the hardest free crack lines in the area. By far the best route during 1976 was ‘The Push' (19) by Richard Curtis.

During 1977 there were many repeats but no new climbs put up.

Eager to find the perfect cliff, the locals in 1978 started to explore further down the gorge on the eastern side. ‘Pineapple Rough’, ‘Colony Wall’ and ‘Pinnacle Ridge’ emerged, but only a number of new routes were put up at each of these areas. Joe Friend moved to Armidale and was primarily responsible for this enthusiastic exploration. Two examples of his enthusiasm are 'Portable Rip-Off (19) at ‘Yellow Wall’, done in sand-shoes, and the long multi-pitch route 'Moments in Never’ (17) at ‘Grey Wall’. Birchall and Prior did among other things, the beautiful off-width 'Aristocrack' (18) on ‘Pinnacle Ridge’. Killip teamed up with popular (?) Queensland climber Robert (Squeak) Stazewski to do the prominent ramp on ‘Colony Wall’, 'Menagerie' (12). Geoff Francis, UNEMC's quartermaster and safety officer, did a couple of short new ones with Stephens at ‘Pineapple Rough’ in 1979. Apart from these, no other new routes were attempted that year.

1980 was also very quiet. Except for Ed Sharpe's 'Far Canal' (16), which has since crawled back into the mank due to poor patronage, the only other route was Austin Legler's 'Humble Pie' (18), which has repulsed many aspiring leaders and forced them to eat it.

1981 produced two classics; 'Arms Race' by Birchall (later freed by Mark Colyvan) and 'Teddy Bears Picnic' by Paul Bayne (also freed by Colyvan). Note: I have used a star system to indicate the routes of better quality.This does not mean that all the other routes at each cliff are leprous piles of mank, nothing would be further from the truth.The system is very simple, in fact, you'd have to be a bloody moron not to understand it. If you don't agree with my opinion of what's a good climb........tuff luck!

1982 was, at the time of writing, the year of greatest activity, with 13 new routes at ‘Yellow Wall’ and 5 at ‘Colony Wall’. Many are great climbs such as John (Jack) Lattanzio's ' Men of Good Fortune' (20 ), Bayne's 'Magnifascent' ( 23 ), Lattanzio's 'Crucifix' (22 ), Paul (Animal) Colyvan's 'Switchblade' (21) and Stephens and Bayne's multi-pitch epic 'Golden Handshake' (23 ). Without doubt the greatest achievement during 1982 was Bayne's first free ascent of the old Dixon/Stephens aid route Pin-Up' which went at 25. His fingers still resembled #1 rocks several days later. Since then Pin-Up has only had one repeat. This was by visiting New Zealander Simon Vallings.

1983 was a return to the quiet times with only four new routes. One of these, 'Sundance' (24) by Chris Dale (an extremely tall English climber), has seen more 'notable failures' than ascents. Curtis and visiting Victorian Kevin Lindorff were responsible for the only new routes done in 1984; 'Rough Justice' (19) and ‘Enfant Terrible' (21), a bold bolted arete.

From this time to 1989 there were no new routes done. Late December Tim ( Tadpole) Ball squirmed into town, knowingly stole 'Evil Angels' (24), a wall route cleaned and bolted by Al Stephens, slumped his way up 'Santa Claws' (25MO), then went back to Brisbane.

1991 produced 'Trad Jazz' (17 ) by Lattanzio and 'Backwards to the Future' (17 ) by Curtis, both at ‘Pineapple Rough’. In April the same year Curtis surprised everyone, and probably himself, by safely completing the very loose 'Shattered' (18 ) at ‘Yellow Wall’, without injury to himself or his second.

1993 saw six new routes with five of them being bolted walls. Gordon Low was responsible for three of these beauties; 'Zussamen' (16 ), 'Social Misfit' (19) and the short but very sweet 'Saracen' ( 22 ). Also of note is Chris Fiddyment's short instant classic 'Wee Dangler' (15 ), the only crack climb that year.

Since 1994, interest in Yellow Wall has decreased as climbers turned their attention towards climbing and developing other areas on the western side of the gorge (Dome Wall, Persian Carpets etc.), Moonbi, Ebor and Mt. Kaputar but don't be fooled into thinking the pool of new routes has just about dried up. Far from it. Potential for new routes (including cracks) at Yellow Wall as well as at Pineapple Rough and Colony Wall is vast and potential for bolted wall routes at all these cliffs has unknown limits. So if you like cracks , roofs, slabs, walls or the prospect of a virgin cliff, then the eastern side of the gorge awaits your presence.

Some content has been provided under license from: © University of New England Outdoor Club (Creative Commons - Attribution Non-Commercial Share Alike) 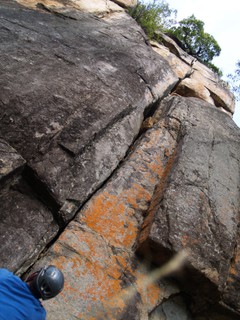 Check out what is happening in Yellow Wall.