Please note that we use cookies to improve the use of this website. By continuing to browse the site, you accept theCrag Site Usage Policy I Agree
Australia
New South Wales and ACTNSW & ACT
Northern Tablelands
Gara Gorge
Western Gara Gorge
Persian Carpets

To get to the Persian Carpets follow access to the Dome Wall, but when you get to the Holiday Cabin drive carefully to the north-north west passing a dam on the uphill side.

Access to Dome Wall or Persian Carpets involves driving through private property to reach the Gara Gorge. Contact must be made with the landowners prior to heading out there:

It is important to let the Coffeys know you’re coming (as access is very close to their house), and ask the Moores for permission to cross their land (providing the most efficient access to Dome Wall or Persian Carpets).

Good relations with these landowners are essential for New England climbers, and all visitors in the future, to access these excellent crags, so please treat them with respect. Leave all gates as you find them, cross fences at the strongest strainer post, etc etc. Access is likely to be refused if tenants are in the Moores’ ‘holiday’ house, so please be patient or better still ask about staying there yourself.

This is a link to a file you can use in Google Earth to see a map to The Dome Wall Parking area:

The history here starts in 1976 when Brian Birchall along with Jill Kelman and Phil Prior did the first routes here in ‘Ataxerxes’ 12 and ‘Darius’ 14. Nothing more was done until 1978 when Joe Friend moved to Armidale and did a few routes here such as the classic ‘Xerxes’ 16 and the flake crack ‘Country Bumpkin’ 14 both with Richard Thomas.

Apart from a few routes in 1980, most notably ‘Deceit’ 18 by Paul Bayne and Ed Sharpe, the area really only attracted the occasional visitor to repeat the likes of ‘Xerxes’ and ‘Country Bumpkin’. The lack of hard crack climbs here, which were fashionable at the time meant ‘The Carpets’ were neglected while development of other cliffs further down the gorge took place.

1982 was the beginning of the bolt era in New England and in 1983 Mark Colyvan, looking for good slab routes visited ‘The Carpets’and proclaimed them worthless (a proclamation he would live to regret!). A couple of years later in 1985, over autumn and winter, John (Jack) Lattanzio, Russell Chudleigh (Chunder), Tim Ball (Tadpole) and Greg Pritchard among other itinerants lived at ‘Camp Pog’ (the camp site in the gully between ‘Dome Wall’ and ‘The Pagoda’ and unlike Colyvan they realised the potential for good steep bolt protected slab routes here. The first to go were ‘Moral Decline’ 22 by Lattanzio, Andrew Collins, and Chudleigh, the very bouldery ‘Carrot Power’ 24 by Chudleigh, Al, and Lattanzio and ‘Autofellato’ 21 by Lattanzio, Chudleigh,and Ball, all done in May 1985. The following month Chudleigh was to climb the brilliant two pitch slab ‘Wolf Tracks’ 22 with Tim Ball in tow and Lattanzio was to do a ridiculously smooth steep slab called ‘Lust Bucket’ 23 with Greg Pritchard and a classic long grade 19 called ‘Rogue Roman’ with a cast of thousands.

The following year, 1986 Al Stephens did ‘Xenophon’ 20 with R. Thomas and M. Farnworth, and Mark Colyvan did a classic short slab/arete ‘Stop in the Name Of Love’ 16 with Joanna Monaghan and Greg Pritchard.

The next period of development was in 1988 and into 1989 after the purchase of a cordless impact drill by Al Stephens and Larry Dixon. A number of classic long slab routes mere done by this pair on both the right-hand end of ‘The Persian Carpets’ and on ‘The Rug’ such as ‘Fleshdance’ 19 and’Nightrnare on Elm Street’ 22 by Stephens and ‘Endlass Vacation’ 20 and ’Reefer Madness’ 16 by Dixon. Dixon also bolted, cleaned, and pre-named ‘The Perfect Crime’ but it was unknowingly stolen by Wade Fairly before Dixon got a chance to lead it. It sent at grade 21. The only blemish on this period was that a few of the earlier routes (‘Skid Ros’ 22, ‘Look Ma No Hands’ 21 and ‘Nightmare on Elm Street’ 22) had small holds chipped after the unfortunate precident set by Mike Lam at ’Dome Wall’ with his route ‘Fuck Knows’ 25 in 1987. Thankfully this trend has stopped (in New England at least) and in fact one chipped hold (on ‘Nightmare on Elm Street’) has been eliminated and cemented up by its creator.

In 1990 Mark Colyvan finally managed to claw and bicycle peddle his way up his route ‘The Last Laugh’ 26.. 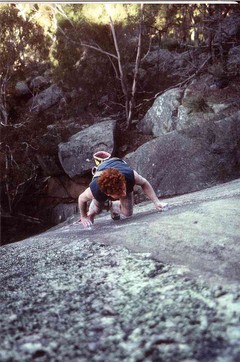 The Carpet - Chunder on 2nd ascent of Lustbucket 23, Gara Gorge 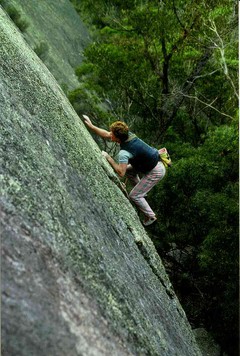 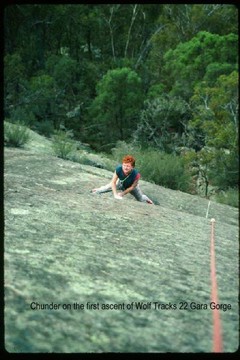 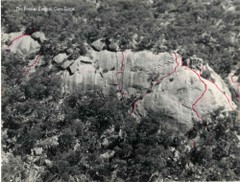 Check out what is happening in Persian Carpets.