Most 'Glasshouse Mountains' climbing is within the Glass House Mountains National Park. Please respect the environment and other people's enjoyment of it. Access to climbing here is a privilege, not a right.

The 2019 Ngungun track expansion & fortification work is now complete, and the mountain is once again fully open.

Several ways exist to approach the South Face and Wayne's World. The quickest and most convenient is by walking on the fire trail from the picnic area near tourist car park and keeping on fire trails to stay close to the mountain.

Once near the middle of the western side, the 4X4 track will cross a couple of watercourses. Here, a faint trail heading east and going over a big burned log, will reach a more defined track, once established and maintained by bushwalkers.

This is now an overgrown ring track. Turn right in the proximity of a large white gum and follow this trail southward, getting faint and scrubby, passing an area of tall black boys.

Soon the trail will turn in a ESE direction downhill towards the rock apron and Fern Wall. From here keep getting closer to the rock face until you reach Wayne's world in approx 40 minutes from car park.

The crags of the south face can easily be approached by walking by the apron.

This approach has the benefit of having a car at a convenient location, doesn't not require a 4X4 and is fairly flat along the way, unlike the old Wayne's World approach route.

The quickest way to descend from the top of the South Face, is to reach the tourist track. A defined but faint trail exist from the western shoulder above shell rock/the Underworld to the upper tourist track. Be careful to stay on this trail and avoid further erosion to this fragile and unique scrub.

Modern climbers establishing new routes have taken great pains to ensure any new routes do not interfere with the historic routes established many decades ago.

Retro-bolting of existing routes is unacceptable!

New routes shall make use of traditional protection where available. 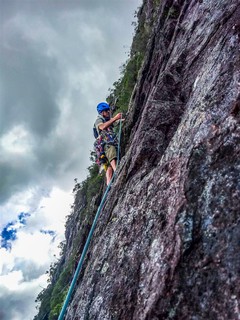 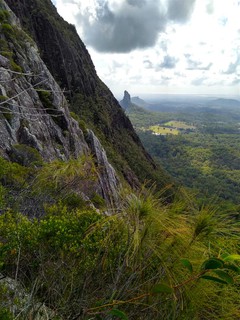 ★★ The Martian 17 - South face and Coonowrin 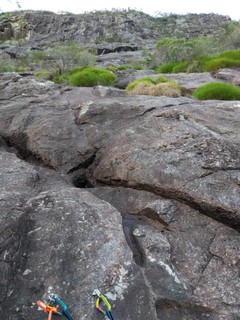 Check out what is happening in South Face.