One of Newcastle's few climbing areas.

Predominantly bolted sport routes with some bouldering. Rock is generally soft sandstone and can be a little fragile. Stay off when wet. Don’t forget insect repellant, there are many mosquitoes in Summer!

Located in Glenrock State Conservation Area, an area of ongoing importance to the traditional custodians, the Awabakal. There are numerous heritage sites scattered throughout the region. The land manager is the NPWS. Climbing is not recognised in the current plan of management, but will be incorporated in the 2021 plan. Climbers should be mindful of flora, fauna and cultural heritage and should not disturb these.

Chalk use should be minimised, and tick marks removed. Use headphones if you need music at the crag. Lookout for crag care days to help with bush regeneration and track work.

Expect to see waterdragons, monitors and snakes. Warnings don’t need to be raised every time a reptile is seen. Leave vegetated caves in cliff faces alone. A number of rare birds inhabit these eg powerful owls.

Glenrock is 5 km east of Charlestown off Burwood Road via Dudley Road and 5 km south of Newcastle via the Pacific Highway. Main access to the crags is via the Flaggy Creek/Yuelarbah Track car park off Burwood Road. (Near the Fernleigh bike track)

The park preserves a considerable proportion of what remains of Newcastle’s physical Aboriginal heritage. The majority of sites have been destroyed or covered over by development of the city of Newcastle. The existence and protection of sites so close to the centre of the city makes the park highly significant to Aboriginal people. At least five Aboriginal site types are known to occur in Glenrock – shell middens, stone scatters, axe grinding grooves, quarry sites and a traditional Aboriginal pathway. Rock shelters with shallow earth floors may have been used for camping in prehistoric times and it is probable that some of these may contain artefacts. No systematic archaeological survey has been carried out in the park and it is likely that further sites would be found were such a survey conducted, particularly if it occurred immediately after fire when ground surface visibility is enhanced. The Awabakal community, Awabakal Traditional Owners and the Awabakal Local Aboriginal Land Council are concerned that Aboriginal sites may be subject to acts of vandalism and prefer that the location of most of their sites is kept secret. They have given permission for a number of representative sites to be interpreted, including the Burwood Beach quarry site, a traditional Aboriginal pathway and the open camp site and midden at the mouth of Glenrock Lagoon. The cliffs and coastline of the park with their exposed layers of tuff, coal and ochre have been a manufacturing and export centre for thousands of years. The Awabakal particularly prized the many layers of rhyolitic tuff, a stone which is rich in silica, hard, smooth and fine grained. It is the hardest form of this rock that was used in tool manufacture. The Awabakal used this stone to make sharp-edged tools such as chisels, scrapers, gravers and rasps which were then used to manufacture wooden implements such as boomerangs, clubs, spear throwers, shields, food and water containers, canoes and paddles. An outcrop of this rock that could be easily quarried, like that found in the headlands from Merewether to Glenrock Lagoon, was an extremely valuable resource.

Roped Climbing and abseiling has occurred for over 50 years, initially by the scouting movement.

An area that has steep sport routes, trad cracks, deep-water-soling, sea cliff climbing and bouldering all within a short drive to some beautiful beaches and national parks is surely worth a look in. The Newcastle and Hunter Rock Climbing guide by Tim Haasnoot is feature packed and includes all the areas worth a day trip from Newcastle. This guide features over 950 routes, 170 boulder problems and 100 DWS with full topo maps and navigation info. 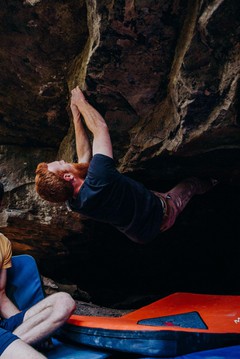 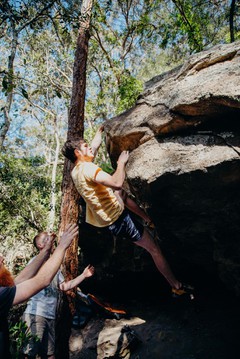 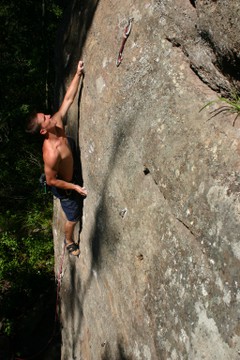 Jared Young at Middle Earth - The Stairs of Cirith Ungol

Check out what is happening in Glenrock Lagoon.