Some positive signs in the Dec 2021 Management Plan:

Yes, it will be. Upper Taipan Wall was assessed and found to have cultural values. However, through discussions with Traditional Owners, who worked with the Gariwerd Wimmera Reconciliation Group alternate access points and other mitigation measures were identified and agreed as suitable for allowing access.

(a) Before you leave the car, please try to poo in the toilets at Flat Rock car park; and

(b) if you need to poo while at the crag (which should be rare if you adhere to (a)!), then please walk at least 50m (no, 10m from the base of the crag is NOT ok!) and make sure you bury your poo and paper.

(c) do not burn your paper. Visiting Americans and Euros bringing this practice with them start bushfires all too often - the Australian bush is highly flammable!

It's a shame we have to start with the above, but unfortunately the popularity of this great crag is having some side effects caused by those who are happy to shit in their own nest. Don't stuff it for the rest of us!

Now onto the good news. 'Taipan Wall' is widely considered to be the best single crag in 'Australia', and many climbers consider that it ranks up there amongst the very best crags in the world. It is certainly the most outstanding climbing feature of the Grampians: a 200m long, overhanging wall up to 60 metres high, which positively glows a stunning orange in the evening sunshine. And the wall doesn't only have good looks: the climbs themselves are almost all of incredibly high quality. While a number of climbs unfortunately require a bolt for aid or have a crux move that is grades harder than anything else on the climb, the climbs are nevertheless generally magnificent.

Because of the uniformly excellent quality of the climbing, previous guides have used "Taipan stars", which effectively involved deducting a star from most routes and only giving 3 stars to those particularly sublime routes which push for the mythical 4th star! In a break with that tradition, this guide gives stars wherever they're deserved - and 'Taipan' deserves plenty! To help you work out what is the absolute cream of the crop, look out for the group of "Taipan's Top 5": Daedalus, Cardigan St (pitch 2), 'Feather Boa', 'Serpentine', and 'World Party' (pitch 3). It could have also been a "Top 7" because Mr Joshua and 'The Seventh Pillar' are right up there too.

Despite a reputation of being largely inaccessible to moderate climbers, the truth is that if you climb in the low 20s there are many days' worth of truly fantastic climbing to be had. In this regard it is worth remembering that, at times when difficult multi-pitch routes are all a bit too much, many of the hard classics have excellent easier first pitches. In particular, the following pitches are highly recommended, and have rap anchors:

(The ~ symbol indicates pitches which must be seconded because they traverse too much to allow rap-cleaning).

Note that a 60m rope is required to lower off many routes, and longer ropes are often very handy. A 100m rope has even been used to work Father O from the ground! In any event, you often need every metre of your rope to lower off, and you're often trying to land on a ledge, so there is a real chance of ending up dangling in space or worse. Take careful note of the rap length and pitch length information provided against each route, and tie a knot in the end of your rope.

Because most routes have slopers and/or smooth holds, bear in mind that temperature and humidity conditions have a strong bearing on route difficulty. The wall has shade until 1-2pm so generally speaking, depending on the forecast daily maximum temperature, you should plan as follows:

28-35C: make a very early start and expect to be roasted off by noon

23-27C: exploit the mornings, but may be ok to carry on in the afternoon sun

<17C: Morning shade will be cold, afternoon sunshine will be glorious, although limited to only a few hours in winter.

'Taipan' is a good venue on days of light showers, but is not great if it really rains. Despite the large areas of always-dry orange rock, the grey & black lichen streaks will seep. The black streaks can develop a surprisingly strong trickle if there's been decent rainfall, due to the fairly large slabs above which drain down these lines. Also, despite the majority of the crag being overhung, the prevailing southwest winds tend to bring rain into the base onto packs and belayers. Plus, if its anything more than passing showers then the humidity will make all the slopers seem harder to hold on to! And don't count on a retreat to 'Spurt Wall' - despite the huge rooves protecting it from direct rain, it has an amazing ability to soak up moisture and all the crimps become disgustingly spoodgy. So, 'Taipan' is a good choice on days of light showers, but if rain sets in you're better off going somewhere shorter, steeper and thuggier.

Please note that due to the fact that the Grampians is a National Park, dogs and other pets are not allowed in the park except in vehicles on sealed roads and in sealed car parks.

Drive to Flat Rock carpark and walk up Flat Rock (noting the difference between "flat" and "horizontal"!). Follow the track down into the Amphitheatre and across the flats. About 300m into the Amphitheatre the track starts to rise again and here the first boulders are met on the left (Trackside Bouldering Area), at this point leave the main track and head left. Follow this track uphill through the boulders for 100 metres or so to a tall boulder on the left with a prominent arete. From here the path up to 'Taipan Wall' is nowadays a well trodden highway, and meets the base of the cliff between 'The Great Divide' and Seventh Banana.

Descents: for climbs on the left half of the wall (i.e. all routes left of, and including, Serpentine), the descent is by a 40 metre abseil from the top of 'Clean Sweep'. Anchors atop other routes (such as 'Divided Years', Father O, Cardigan St and Mirage) are either unsafe to access from above or are poorly arranged for rope pulling, so the 'Clean Sweep' anchor is the only option. It is recommended to get your bearings beforehand (e.g. from the top of Flat Rock) as the anchor can be a little tricky to find from above. Traversing along the top of the wall to this anchor is quite exposed, particularly the section above Father O. While some people opt for the scary traverse on the very edge of the clifftop, this is not trivial above Cardigan St and the fall potential could hardly be worse. The better option is probably to stay about 12m back up from the clifftop above Cardigan St and Father O but this is still quite exposed so take care, and if in doubt rope up. Once you're at the 'Clean Sweep' abseil anchor, make sure to test-pull the ropes before the last person comes down because the ropes regularly get jammed on this abseil. Hint: the last person should step to abseiler's left to avoid laying the ropes in the offending groove on the lip. Right of 'Serpentine' it is not safe to walk unroped along the clifftop, and descent details are specified against each individual route below. 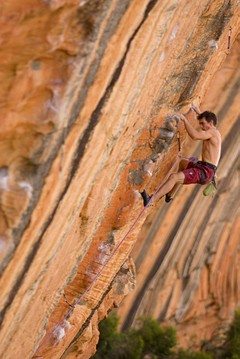 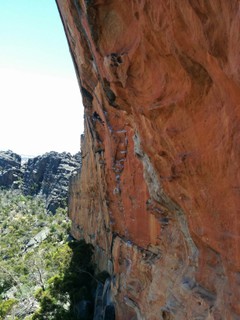 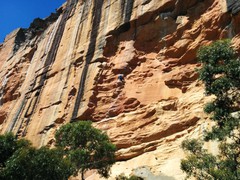 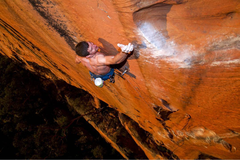 Check out what is happening in Taipan Wall.