Moonarie is one of Australia's most spectacular crags, situated as it is on the rim of Wilpena Pound, surrounded by sweeping deserts views. It is easily South Australia's premier crag, with superb rock and loads of fantastic quality routes. Isolated as it is, it is very much an adventure destination, and a worthy stop on the Australian rock climbing tour.

Moonarie offers a varied trad climbing experience, with a good range of intermediate to hard routes. There is very little in the way of sport routes, but the trad climbing is fantastic, the quality of the rock makes it ideal for placing gear. The rock has a similar feel to Arapiles, with the same mixture of natural gear and the occasional bolt. Although there are some easy routes, Moonarie is not a beginners crag. Moonarie is really an intermediate to advanced climbers cliff. The climbing starts in the low teens and stretches up into the high 20's. The climbing varies from single pitch excursions to long multipitch routes, that wind their way up to the rim of the pound.

One of the most striking features of Moonarie is the famed Great Wall, a spectacular stretch of rich red vertical rock 50 metres high, that offers some of the best climbing on the crag. The Great Wall is the home of possibly the best 19 in the land, Down Wind of Angels. Down Wind of Angels is only the beginning of the good routes on this wall, there is also Outside Chance 16, the amazing looking Dryland 22, and a host of other starred routes in the low to mid 20's. The Great Wall is only one area of Moonarie, there are other parts of the crag which are just as spectacular, the Ramparts, Flying Buttress and The Great Chimneys area. Like Arapiles, Moonarie is a crag which is rich in classics.

Perhaps more than any other area Moonarie is a crag which is best visited in exactly the right season, otherwise you end up either very hot or very cold. The two recommended times of the year to visit are between March and May, and September to October. Wilpena Pound is a land of extremes. Visited at the right time of the year though, Moonarie is a rich and incredible climbing experience, well worth the long drive to get there.

As at 2014 there is NO mobile phone reception at the campground or the cliff. You can get 1-2 bars of reception on the Telstra network ABOVE the crag, but only above Gargoyle Wall (100-200m southeast of the top of the main descent gully). There is full coverage on Telstra at Wilpena, 15 minutes drive away.

The Traditional Owners (Adnyamathanya Yarta - Which means rock people) have welcome to country nightly at 6pm in Wilpena Pound. They would like all visitors to attend welcome to country at the start of their stay. Attend an amazing ceremony to meet them show respect to the TO's and their relationship with this beautiful land that we share as "rock" people.

Upgrades to the visitor facilities are currently being undertaken by the Department for Environment and Water (DEW).

The Climbing Club of South Australia (CCSA) understand that there are not currently any access restrictions, however if any issues are notes, please message the Mieka Webb (0419 183 004) or Rob Baker (0439 893 486).

450 km north of Adelaide. From Hawker drive north on Wilpena Road for about 45km towards Flinders Range national park. Turn left onto Arkaroo Rock Road (signposted). About 700m turn left onto a rough track. 500m or so down this you'll arrive at the campground.

There is also a bus that travels between Adelaide and Wilpena Pound.

From the campground walk across the creek then step over a fence on stepping stones. A 45 minute walk uphill gets you to top camp, in between Checkers Wall and Flying Buttress. Most people stash gear at top camp each night, which reduces the walk to 25 minutes.

There is a campsite at the base of the track up to Moonarie, which is on private land, so it is very important to leave this area in a respectable state. There is no toilet so BRING A SHOVEL AND BURY YOUR POO (it is slow digging the rocky ground so dig a deep multi-use hole to save being caught out if in a rush). It is also possible to stay at Top Camp, right beneath the crag, although it is a bit of a walk to drag all your gear up there. Please note that Top Camp is within the bounds of the Flinders Ranges National Park , and camp fees apply , and FIRES ARE STRICTLY PROHIBITED ! If you desire more facilities, it is possible to camp at Wilpena Pound, or find accommodation in the closest town, Hawker.

Some content has been provided under license from: © Cameron Roy (CC BY-SA 3.0 AU) 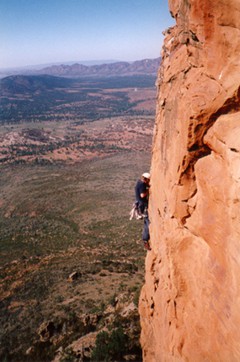 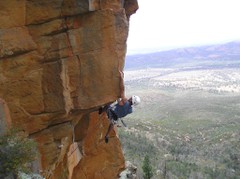 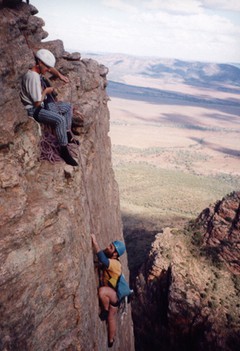 Check out what is happening in Moonarie.