The Paradiso is an amazing crag that suffers from one significant flaw……..the dreaded ‘spooge’. There will be times when you arrive for a days climbing and the wall will be covered in a wet slippery ‘spoogy’ coating that renders it unclimbable. You’ll sit around waiting for it to dry. Sometimes it will, and you’ll get to climb. Sometimes it won’t and you will curse a wasted day. If you have a spare 15 minutes, try to ask a local climber how they decide whether it is worth the drive and walk. Brace yourself for some sort of long winded spiel that includes things like ‘strong northerly vortex of at least 10 knots’, or ‘wet bulb humidity flim flam’, but let’s face it even the locals don’t really know.

Really all anyone can do is try to stack the odds in their favor.

‘The Spooge’ seems to have nothing to do with rain, and seems to have little to do with ocean spray. It seems to have something to do with the rock itself being colder than the air and moisture condensing from the air onto the rock. So if it is humid, it is likely ‘spoogy’. The sun will tend to burn off the spooge, but the main overhanging Paradiso only gets sun very late in the day.

How do you maximize your chances?

• Try to pick a day with low humidity. Less moisture in the air will mean less spooge condensing onto the rock. On the morning your planning to go, do a search for ‘Tasman Island Weather Observations’. You will get a table of hourly conditions from the Bureau of Met , including temperature, wind and humidity. • Look at the ‘Delta T’ column on the table. If it’s been zero overnight, and it still less than one in the morning, then it’s probably spoogy. If it has been higher than 1 all night, and in the morning is in the 2’s and rising you may be in luck. Delta T’s above 3 seem to coincide with drying conditions, and 4’s and 5’s mean party time! • If your encouraged, start your trip. The later you arrive, the better chance that the wall (if it is spoogy) has dried by the time you arrive. Most locals don’t arrive before lunchtime.

Routes on the left side of Paradiso get more sun, earlier in the day. They tend to be much less effected, and dry sooner, so usually can be climbed or used as warm ups if your waiting for the routes in the main overhanging Paradiso to dry.

Many locals continue to use community run website thesarvo.com for crag/route updates and noting any access issues. The associated app can be downloaded and used offline!

From the ‘Remarkable Cave’ car park (come early to have a spot during holidays), walk back 50m to the ‘mount brown track’ on the right. Follow the sandy track for about 30min, past the Maingon blowhole until you reach a sandy downhill creek. From here the track follows the rocky coastline to a series of slabs. The access to the cliff is at the end of the slab, by staying right and going down a 2m easy downclimb (baby or dog here would be ill advised).

Cracks, sea stacks, big walls, remote exotic locations, volcanic columns, no crowds and your choice of the predominant dolerite, some quartzite and a little sandstone to remind you of the mainland. Many a wilderness climbing experience can be had within a 2hr car trip from the main centers. By Gerry Narkowicz. This guide features 1280 routes. 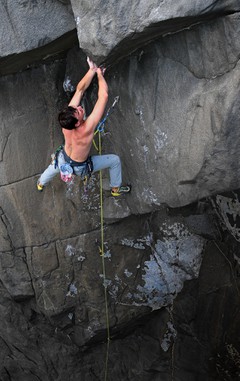 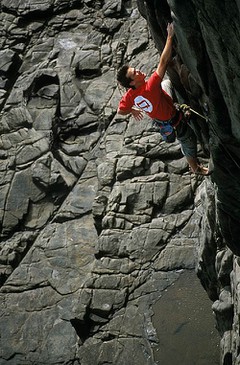 Lee Cujes on ★★ Super Charger 23 - This is Cryder's (from rc.com) photoshopped version - look closely at the ground =) 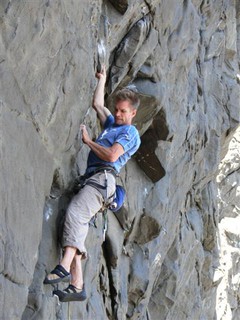 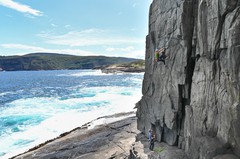 Check out what is happening in The Paradiso.