Perth area's premier outdoor climbing crag with a large number of sport and trad climbs, close to the city with good parking.

Mountain Quarry is the Perth area's premier outdoor climbing crag. It is located within Greenmount National Park, north of Coulston Road. It is very well-developed with a large number of bolted routes, having first been visited in the 1960s and developed ever since. As well as many sport routes for all experience levels, it also offers a number of trad and multi-pitch routes.

The gravel road into the quarry runs off the carpark on Coulston Road and has a combination-locked gate (normally locked), the code to which can be obtained from the Department of Parks and Wildlife Perth Hills District office (9290 6100). The quarry is also easily accessible on foot from the car park on Coulston Road. Don't leave valuables in your car.

The quarry is situated on the north side of Coulston Road. The entrance to the car park is about 100 metres past the junction of Coulston and Hudman Roads. If the gate lock combination is known, the drive into the quarry is straightforward in a 2WD vehicle. The walk up the hill from the car park is about 5 minutes. Don't leave your car unlocked even when you are climbing nearby, opportunistic thieves on motorcycles are known to visit.

When the quarry was first visited in the mid-60s, it was a forbidding, rock-strewn death trap ringed by loose and menacing boulders on the skyline. The place is completely different today. Development at 'Mountain Quarry' was slow due to the lack of naturally protected lines at the then current level of climbing.

A breakthrough arrived in March of 1988 when Mark Colyvan from Armidale NSW freed the old Michael Adams - Tony Fowler aid route Damper A2 at the new grade of 23. The line was renamed 'Skywalker' and it still stands as a strenuous test piece for the grade. It takes a left traversing undercling and jam crack at the most obvious roof in the Quarry (on the right as you enter). In April 1988, Mike Law made a whirlwind visit and created Fuzz Bucky, with a chip here and a chip there. This climb can be found on the blank low angled wall facing the entrance. Originally grade 24, now 26, as far as the author knows this climb has not received a second ascent. These visits sparked new activity by locals, now armed with bolt kits

The first of these 'new' lines was Urban Ethics (22), a good quality face climb by father and son team R & R Master. Others joined in with a number of good climbs in the 20 - 21 range. Harry Butler produced Vader (22), an excellent line that has dumped a few budding hardmen, and 'Power Play' (20), a gently overhanging flake crack originally done on aid. Ron Master with Michael Adams then put up Go For Broke (21M2), a route involving some exposed face climbing with delicate aid moves to finish. Other routes for that year were Butler's 'Chrysalis', an unrepeated loose face climb, and R & R Master's sustained Hang Ten, which the team later straightened out at grade 24.

Sporadic activity continued through 1989 - 1990. A shaded seasonably wet bay at the back of the Quarry produced Split Personality, again by R & R Master. This climb takes a flake, wall and crack system with 2 variants at grades 17 or 21. These two also bolted and climbed Mullup (21), a good quality route with a delicate but well protected crux. David Wagland appeared on the scene in April 1990 to climb the classic Barren Awakening (23M1). This line consists of a wall and open corner at the central end of the Quarry facing the entrance. The crux involves a bracket bending dyno past the first bolt. Attempts to free the aid have failed.

Progress continued and the first sports-type climbs appeared but not without some controversy. On entering the Quarry, a small bay to the left is encountered which contains a steep 10m wall, with an obvious gently overhanging thin flake crack. This problem was first climbed, on aid, by Peter McKenzie who took a ground fall when his pitons zippered on the final placement. Several years later, a visiting UK climber was witnessed successfully soloing the climb after several times falling from half height. Then three bolts appeared courtesy of Shane Richardson, who did not know the past history, and City Limits was given a grade of 26.

Gary Matier put up Sylvia (21), on an obvious granite buttress in contact with a dark collapsed dolerite dyke, and The Force (22); a good line with varied wall climbing. Matthew Rosser contributed a sustained and technical climb on compact dolerite at grade 22, this line is called Land of the Orange Druggie. R & R Master were back again in 1991 with 'Fringe Benefits' (23). This climb shares its start with Vader but instead of moving left to the arete, takes a thin seam and wall through the left edge of the 'Skywalker' roof. The team also climbed a sister route to Wagland's Barren Awakening, which uses the same upper chain anchor. Learning to Fly (23M1) contains sustained and technical cruxes, hence the name

Even more recent is Peter Koval's Month of Sundays, a weekend project that eventually yielded a well prepared and technical grade 25. A bolted line has appeared on the wall between Urban Ethics and Go for Broke, put up by Phil Calais, it is graded at 24 and known as Star Wars. This climb contains some dubious bolts and pitons, hence it is advised that gear should be checked before leading.

The sports climbing scene arrived into the quarry with a vengeance with Anthony Bell's 1993 effort Cranial Void (27), a route that seems to have all the good holds upside down! Hardbody boulderer Derek Toulalan then added Sweet Pea, originally graded 28 but now downgraded to 27. Bell replied with Black Ambience (29) but the softly spoken Gerard Chipper has had the last word with his desperate deeds on Cardiofunk (29). These are the hardest climbing routes near 'Perth' to date. Much cleaning of the dirt-covered City Limits wall by Logan Barber & Co. produced Space 'Monkey' (28) and there are two more projects nearby.

'Mountain Quarry' still has the potential for new lines and not all of them in the upper grades. However, effort will be required to remove loose rock and create the necessary bolt placements. 'Mountain Quarry' is now Perth's premier top end climbing venue. 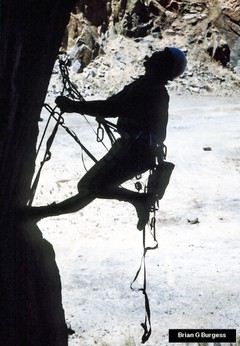 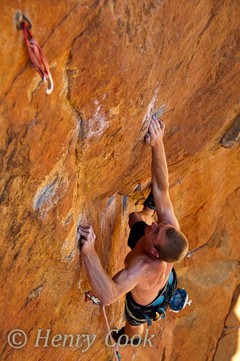 Check out what is happening in Mountain Quarry.