After cancelling this event 2yrs ago, with the pandemic raging across the world back then, this track stabilisation work is sorely needed.

The big weather events of this year, have really eaten into the first 50m of track, just inside the sluice gate. (Private land, but I have been in touch with the landowner & have his nod of approval.) 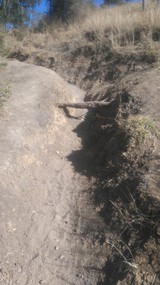 This first 50m or so, of the track, is really just sandy soil, with few rocks in it, or trees to stabilise the soil. The big root, visible here, was not visible 6-7yrs ago. So about 1m of erosion in that time.

It's more than 1-2 people can manage, hence my appeal here.

Aim for a 9 a.m. start. 2-3hrs. A fellow climber has a small transporter we'll use to transport the rocks from the tree line above, down to the track & then manhandle these into position.

Bring water and a sun hat.

Bold trad. Big walls & many long multi-pitch routes. Heaps of untouched rock. Most areas are very seldom visited = many crags are in a pristine state. Climbing is quiet, just you & nature most days.

Great views of the Fassifern Valley, the Moogerah Valley, Knapps Peak to the North & Mt. Lindsay + Mt. Barney to the South.

Access from the carpark at Cotswold Rd. to the National Park is across gazetted private land - from the sluice gate:

walk up roughly 400m to the National Parks sign: 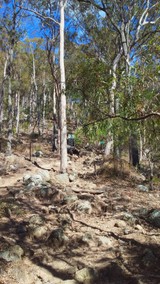 This is the start of the National Park. Visitors are urged to stay on the path or use established tracks, rather than blazing a new trail.

Access is via 2 roads - Cotswold for all crags bar Maggie's Farm & Paddy's Plain & the southern areas which are accessed via Seidenspinner Rd:

The approach to most of the climbing areas is severe. Allow 1-1:15 to get to the start of Ruby Of India; about 30min to get to Viewpoint Buttress and about 1:15-1:30 to get to the Paparazzi Cliffs. 2hrs to the Tiger Face. 2hrs to the N.W. Columns. Maggie's Farm is a 5km walk in & is, as of 2019, mostly out of mobile coverage = be prepared in case of injury.

Bigriggen is by far & away the best camp ground in the area. Drive another 7kms east towards Rathdowney, turn off, after crossing the Logan River, onto Upper Logan Rd. & follow the signs to "Bigriggen": https://www.bigriggen.com.au/

If you're after a bit more luxury than camping, Bilyana Cottages are 10km North of Maroon, just North of the Maroon Dam turn-off: http://www.bilyanacottages.com/

Sport bolting is a big no-no here. If you place a bolt here, you'd better have a damn good reason, even then, expect it to be chopped.

Prior to the arrival of Rick White (early 1968) at Maroon, very few climbers had visited the mountain = there are no records of ascents pre-1968. Rick, together with Chris Meadows, Ted Cais, Paul Caffyn & others, established well over 100 routes, all of which are pure trad but the rare button bolt was left behind on the hard East Face routes ("Phaedra" & "The Anti-Christ"). The only enhancement that Rick did, that I know of, was on "The Nympho" (Nympho Buttress), where he drilled a handful of holes into the rock (to insert rods into), so as to aid climb the blank section. Rick established Australia's first grade 22 route with "Valhalla" (East Face) in 1972. The other big contributor of ascents on Maroon is Robert Staszewski, who has climbed there since 1969 and has established well over 100 routes there, all of which are trad. Visiting Victorian climber Chris Peisker put up Queensland's first 24 in 1977: "Wounded Bird". Some development in the 80s by Paul Hoskins, Even Bieske, Chris Frost, Mark Plenderleith & others. Scott Camps arrived on the scene in the early 80s & has established a score of routes there, some using partial bolting to keep them sane, amongst these, two 24s ("Thins" & "C Mon, I Told Ya So"). Herb Brandmeier arrived in the early 90s and established many sport/part sport routes here & controversially opened a new "sport" crag on the mountain - Paparazzi Cliffs in 2004. In the 2000s, Terry Svingen & Mark Gamble established several trad routes. A new hard multipitch route was added to the very exclusive club of routes on the formidable Tiger Face in 2004: "Solar Quartet" (23 with aid=has yet to be freed). Maroon's hardest route was freed in 2007 by Adam Donoghue & Gareth Llewellin: "The Anti-Christ" (28). Mark Gamble 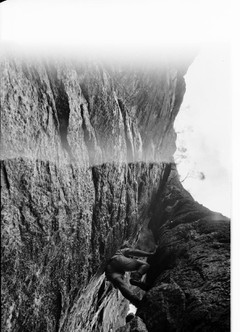 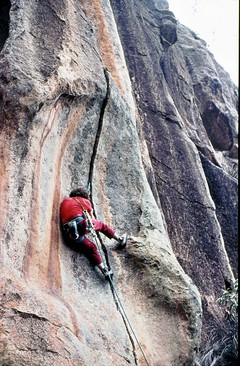 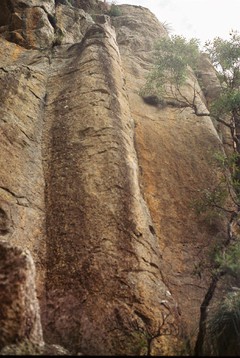 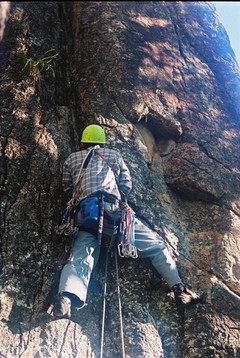 Check out what is happening in Mt Maroon.