Please note that we use cookies to improve the use of this website. By continuing to browse the site, you accept theCrag Site Usage Policy I Agree
Australia
New South Wales and ACTNSW & ACT
Sydney Metropolitan
North Shore
East Killara
Queen's Country

A bouldering area located in the bushland of Killara. There is heaps of rock scattered throughout the bush and only a small amount of it has seen any development, so for intrepid boulderers who don't mind a bit of bushbashing there is plenty of potential for new problems.

The grades of the current problems are entirely subjective and depend on what the developers found hard or easy on any given day so don't take them as gospel.

There is parking on the left hand side just after the speed camera on Eastern Arterial Road when heading north from the city.

After parking walk into the bush and cross over the creek and turn left to follow the path along the creek bank.

Continue straight when the path veers off to the right and cross over the small side stream and continue following the creek bank.

When you see a green household garbage bin that has become wedged amongst some trees turn right and bash up through the bush.

Continue uphill and you should see 'Mossrock boulder' ahead.

I don't believe there has been any climbing here previously but if anyone knows some history for the area let me know.

One of the developers Scott Lacey, often saw rock through the bush when driving along Eastern Arterial Road but it was while before he bothered to actually check it out.

One day off he bushbashed his way in and discovered a heap of scattered rock and bouldering potential so he recruited his brother James Lacey to start development.

A handful of boulders were discovered and cleaned and problems were sent. Now that one of the developers, James has joined the army the sole remaining developer, Scott has decided that it's best if the area is public so it can see further traffic and development! 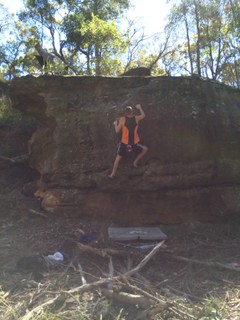 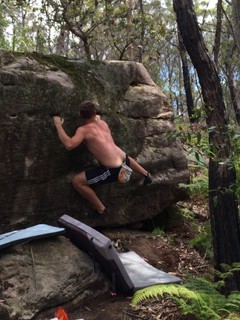 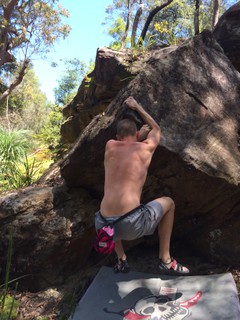 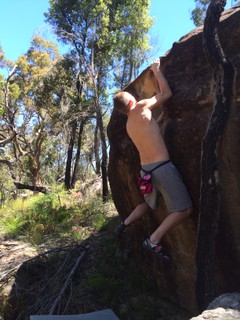 Check out what is happening in Queen's Country.