The Trenches All Bouldering 133 routes in sector

Find Renown Rd in Baulkham Hills. On the North Side of the 'Big Dipper' turn into 'Ted Horwood Reserve' (Plenty of parking). In the back left corner of the carpark upon entrance follow the path leading in between two soccer fields. Keep walking straight, through the gap in the fences onto the bush trail that starts with a steep descent to the right. Follow the trail about 100 meters and the trenches will soon appear

The Balkans is partly located in the Sydney suburb of Baulkham Hills so it’s no wonder that its location was initially mistaken for "Balkan Hills", and the name has stuck. The Balkans was discovered in early 1999 by Tim O’Neill and Rob Saunders and the pair immediately set to work putting up problems (although a small area nearby, called the Swampland, was discovered some time earlier by Kevin van Tillburg and Rod Wills). With the help of Adam Griffiths and visiting US student, Matt Wilder, original activity was focussed on the eastern side of the valley at an area named the Frontline. Some other Sydney boulderers were enlisted, and Peter Balint, Jason Whitton and Angela Connolly began developing problems on the western side of the valley at an area named the Trenches. Activity varied between the western and eastern sides throughout the winter of ’99 with a third area called the Caves being developed along the way.

Featuring 1142 climbing routes located at 24 of the best crags in the Sydney area, this A5 size guide book is super user friendly with easy to use colour cliff topos and access maps. Covers sport and trad climbing at a variety of grades, something for everyone. 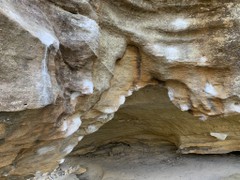 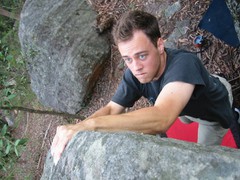 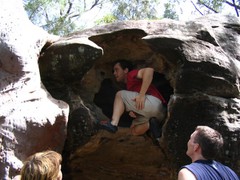 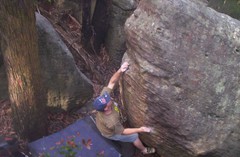 Martin Godley at The Trenches - the trenches, do you know this problem

Check out what is happening in The Trenches.