Only a few problems here; however what Black Cave lacks in quantity it makes up in quality of climbs.

Park on Beatty St and take a narrow walkway from about halfway down the street, with stairs all the way to the beach. Hang a right and then walk along the rocky shoreline a couple of hundred meters to the crag. http://youtu.be/5SUPg5N0hvw 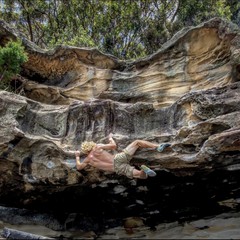 Will Schubert on ★★★ Aquarius V6 - Aquarius 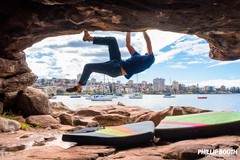 Phillip Booth on ★★ Right to Left to Topout V5 - Enjoying the view!

Check out what is happening in Black Cave.