Dry in the rain Sheltered from wind

The biggest bouldering area in Adelaide.

NOTE:
The same regulations apply here as to the main area of Norton Summit (i.e. no climbing after sunset or on fire-ban days). Try to keep noise pollution to a minimum, stick to the walking trails and take your rubbish with you.

The Pad is located on The Old Norton Summit Road, about 1km down hill from The Summit (the climbing area not the actual summit!). To get there drive east out of the city and head up Magill Road. Continue straight onto Old Norton Summit Road for 2.5km. About 100m after passing house number 225 (lot number 59), there is a tiny pullout for parking on the left side of the road.

There is only space for a few cars to park, so be courteous of others. There are extra parking spaces further up the hill near the next house's driveway. The track up to The Pad is located on the other side of the road (south), opposite the Stobey pole about 50m downhill of the parking pullout. Cross the guardrail and you will see the track heading across the creek and up the hill. It take about 10 minutes of uphill slog to reach the cliff.

This is private property so please be considerate by keeping noise, music and swearing to a minimum.

Normal rules apply, take everything with you, this includes finger tape and cigarette butts.

Track maintenance is the responsibility of any climber that chooses to frequent the Pad.

First discovered in 1995 by Stuart Williams and Simon Wilson whilst looking for routes they quickly sunk some bolts in what would become Bachelor Blend 23 and named the cave the Bachelor Pad. Word eventually filtered out and the Pad's bouldering potential started to be tapped in 1996 by an eager young crew. Many of the easier lines were climbed during this time but it took the visit from international rock stars Klem Loskot and Toni Lamprecht in 1999 to really put this place on the map. On a flying trip to Adelaide to recuperate from developing the bouldering in the Grampians over two days at the Pad they opened Madball sit V13, Hot Chocolate V10, Madball stand V9, Twist and Shout V9 and Benelli's Extension V8/9. Over the next few years local Sharik Walker filled in the blanks with ascents of the classic Butchers V10, Tao V11, Cocktoe V9, Kid Indestructible V9, Toe to Toe V7 and Non Intentional Lifeform V10.

On first acquaintance with this place you could be forgiven for thinking that the 50+ problems listed in this guide must be an error. Shorter than the length of Sissy Crag (NSW), not as high as Lindfield, The Fear Factory or Akuna Bay (NSW), and less inspiring than Trackside or Anderson’s (Vic) – it is nevertheless home to the hardest problems in South Australia.

Not only that, but it is also less than 20 minutes drive from the city, 3 minutes drive from a pub, and stays dry in the rain. What more could you want? Difficulty ranges from V0-V13, with just under half of the problems sub-V6, and all the rest being mainly in the V6-V10 bracket.

No camping No fires 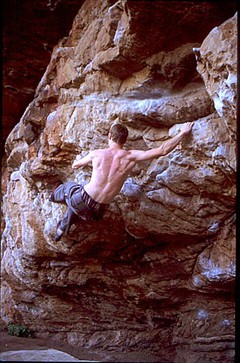 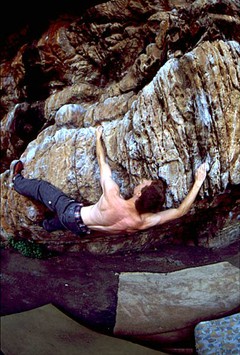 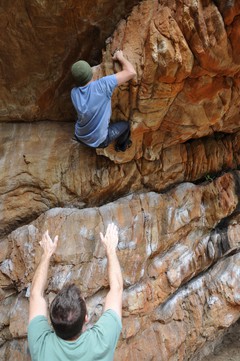 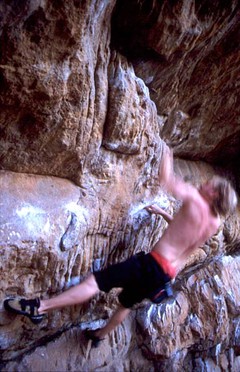 Check out what is happening in The Bachelor Pad.