A quarried cliff not climbed on for many years.

A small cliff near the Plenty river. Similar volcanic rock as in the road cutting near by. Short climbs(<10m).

The parcel of land that the quarry is on, is now coming back into public land hands. Parks Victoria will be acquiring this land and is in the process of doing so. They are supportive of allowing climbing here once acquired, so don't jeopardize access by sneaking in now!

Plenty Gorge is an old basalt/bluestone quarry that has approx 18 routes of about 8 metres or so. From all accounts it was quite a good crag albeit small with the added bonus of it being close to Melbourne. The quarry was on private land and eventually, climbing was banned there by the private landowner. Anecdotally, it was banned due to incidences of climbers not respecting some of the access details to get to the climbing site.

#*Plenty Gorge Park currently has very limited climbing within the park itself. What is there is very unstable and unsuitable for anyone other than experienced climbers and quality of routes ie worthwhile, is debatable. Not suitable for groups.

The parcel of land that the quarry is on, is now coming back into public land hands. Parks Victoria will be acquiring this land and is in the process of doing so. A fortuitous meeting with a ranger in April 2014, alerted a couple of climbers who were in the park itself, not the banned area)of the intended acquisition and drafting of a master plan document. This information was then passed onto CliffCare and we have been involved in this from then on by providing information to the consultants and discussions with PV staff. Feedback was supplied for the initial community consult. Fast forward to present day December 2017, and it is encouraging to see that potential for climbing has been included in the plan. The plan has been put together before the acquisition has occurred so once this happens, we can engage in more solid discussions about the site.

Between the 19 November and 15th January, they are requesting feedback on the draft plan. Any positive thoughts you can provide on the potential for climbing at Plenty Gorge would be great. Documents are supplied below as well as the links for more information and where and how to provide feedback. It’s still a long way to go but all these steps will hopefully lead us to a positive outcome. I should say that my engagement with all concerned has been a positive one from my initial discussions.

The edge was quarried many years ago and is now quite stable. I did some climbs there back in the 90's with a fellow climber who knew the owner. We took a brush cutter and it got plenty of use. Tiger snakes were a natural hazard in summer. It was written up in The Eastern district guide.(p 209)

The area is going through a huge housing development and the cliff may be open if the property is bought out and added to the gorge park. 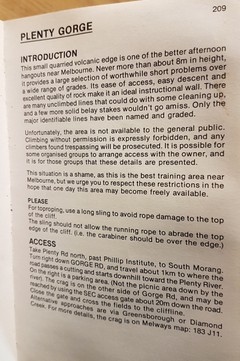 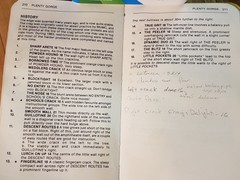 Check out what is happening in Plenty Gorge.