Please note that we use cookies to improve the use of this website. By continuing to browse the site, you accept theCrag Site Usage Policy I Agree
Australia
TasmaniaTas
South East
Hobart and surrounds
Rocky Tom

This crag has a high occurrence of visits by Scout groups and school 'adventure eduction' classes. The reason for its popularity with novices is pretty obvious when you visit, as it is one of the few cliffs in the Hobart region with a predominance of excellent easy routes. It also contains its share of good hard routes. Rocky Tom's popularity is also boosted by its closeness to town and a sunny aspect. The climbs at Rocky Tom are usually top-roped which is quite easily done (many have been soloed and, to my knowledge, no-one has ended up like Russel Chudleigh yet). Stainless steel bolts provide anchors at the top of some of the more popular routes, and trees are otherwise plentiful. However, there are few gear placements for those who would want to lead. Most climbs are about 8m high and all are on sandstone.

Access to Rocky Tom requires a ten minute drive and then a 30 minute walk.

NEW ACCCESS: Park at the end of Geilston Creek Road (~ number 85, at a Y intersection where the sealed road ends). Follow the marked walking trail through the reserve, following a mixture of walking tracks and fire trails. As the fire trail sweeps around to the right at a small bridge, a newly formed walking track heads left, up the slope.

Follow this until in hits a fire trail, then push steeply up the hill to a saddle. ~100m further on, turn right and trudge up the hill, following a light track if you’re lucky. At the top of the hill Castle Rock is on your left, Shadow Buttress is on the other side of the hill on your right.

OLD ACCESS: From the city centre, head for the eastern shore via the Tasman Bridge and head for Sorell. Leave the highway 4 km from the bridge at the B33 exit (Mornington, Warrane, etc), turn R toward Flagstaff Gully and park 5 km further on, past the first entrance to the Quarry, at the Flagstaff Gully Reserve, before the entrance to the Quarry proper. Note that the gate at the bottom of the initial hill, by the reservoir (800m from the end of the road), is locked after hours, so it is advisable to park in the area provided just outside the gate. The gate is open: weekdays 6am – 4pm; Sat 6am – 12 pm; Sun closed. The walk has been considered by some to be steep and exhausting, but it is short and along a well defined track. From the car, walk to the end of the bitumen road. Follow the 4wd track (now very rough) which leads down left from behind the tree in the middle of a parking bay. This soon crosses a creek and then heads uphill. After ascending for about ten minutes, the track veers R and a walking track heads up to the L. Follow this for 200m up to Shadow Buttress. The buttresses and climbs are described in the conventional L-to-R ordering. Note that the track first approaches Shadow Buttress, then crosses the hill to Hanging Buttress, before swinging east past the rest of Castle Wall, Square Buttress and White Stump. The Bastille and Lone Tower are approached from Shadow Buttress by deviating from the normal track.

As top-roping is the status-quo, the climbs have been graded for a top-rope ascent. 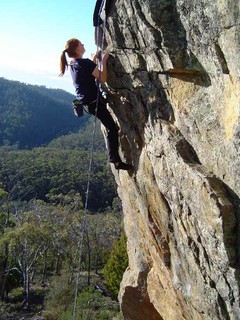 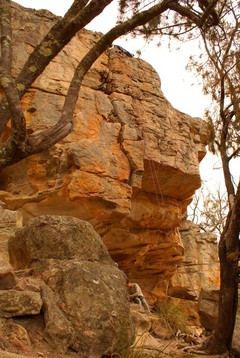 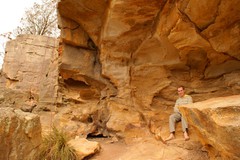 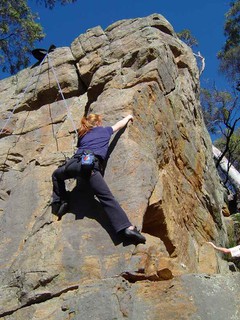 Check out what is happening in Rocky Tom.