The Shire has a long history of climbing. Accessible cliffs, routes you do not have to die for and a variety of locations keep the suburbanite climbers happy. Because of the not so steep nature of much of the sandstone in the area, a lot of routes are of a moderate grade making it a good place for new climbers to develop their craft.

Most of the climbing can be found on the rim of the hills, overlooking the Woronora River and Georges Rivers. The rock is the usual Sydney sandstone but the Cathedral has a a weird type of stone that is a refreshing change from the norm.

There is easy access to all the sites with an average walking time from car to cliff being under five minutes! To get the Shire drive south towards Wollongong from the Sydney CDB or take the Heathcote Road if coming from the South West. West Sydney climbers can approach aiming for Menai. Alternatively, take the train.

Climbing has been going on since the 1960's in the Shire. Gossip has it that an old doctor used to play around the cliffs on the Woronora River in those early years. Joe Friend was also known to climb here back in the 1970's. You can find some old pitons, pin scars at odd locations such as the Heathcote Bridge, Menai area and at the Cathederal. It was common that Scouts and at times the Army regularly frequented places like Menai, Lucas Heights and Alfords Point.

The 1980's saw a steep rise in development with climbers from the Loftus Crew, Anthony Scharnbel,Damian Taylor and Bruce Stevens. A big influence in the 1980-1990's was David Barnes. Dave developed several new areas and put up scores of routes across the shire, including the classic routes at Rainbow Wall and Ruthless Babe and a handful of others at Heathcote. He has now moved onto Tassie. Mikl of course had flurries of activity at the Cathedral, Bonnett Bay and Heathcote when he was working with Homer Simpson at the Lucas Heights Nuclear facility. A Young Graham Fairburn made a good contribution to the Cathederal, before growing muscles at Nowra.

In the last ten years Jason Lammers has added new routes as well as re-bolting the old routes, lower offs and rings have been added to most shire crags now. What will you add? DB

This region has 2 unlocated crags! If you think you know where The Wok or The Cemetery (Bouldering) are located then please take a minute to locate them for the climbing community. 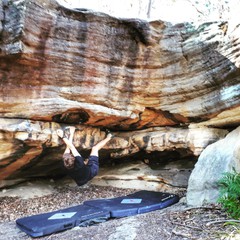 David O'Donnell on ★★ Flapping Around V3

Check out what is happening in Sutherland.