A couple of good problems and an unbeatable 1min approach walk.

Park on Menali Road just before the hairpin bend where a gate is visible. Cross the road, walk past the gate and the 'Fish Food' boulder will appear. 1 minute access.

The crag was initially developed by Paul Westwood. It was named after an old bedraggled man of asian appearance who appeared at the crag wearing no shoes and who looked like he had been walking for a very long time.

Climbers later found out that the man had drowned in the nearby river in an apparent suicide. One may speculate the man believed this was his best option when faced with deportation back to China.

The history is also written in the Sydney bouldering guide.

Featuring 1142 climbing routes located at 24 of the best crags in the Sydney area, this A5 size guide book is super user friendly with easy to use colour cliff topos and access maps. Covers sport and trad climbing at a variety of grades, something for everyone. 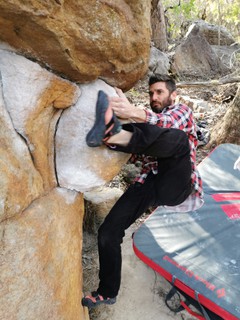 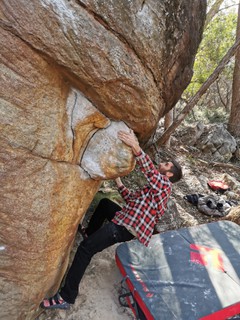 Check out what is happening in Dead Chinese Man Wall.