North Jawbone (singular!) overlooks the Cathedral Valley on the eastern side of the Cathedral Range. Despite its steep appearance North Jawbone is a reclining slab of about 60 degrees. The climbs are over 100m long on quality chocolate sandstone.

Access: From Melbourne take the Maroondah Highway to Buxton (100km). From Buxton continue along highway for 9km, and then turn right onto Cathedral Lane. Follow the road to the Cathedral State Park. Once inside the State Park, drive to the Cooks Mill camping site and continue on until you arrive at the North Jawbone car park. From the car park take the well marked walking track, down to the creek and on up the ridge on the other side of the valley. About half way up a bunch of slabby buttresses appear on the right (almost reaching the trail) A short distance further, there is a marked boulder on the left and a trail leading right, then follow the track to the base of the cliff.

Abseil Descent: The route follows the left edge of the right (Spiegal's Xanthene etc) buttress as marked. The rappels are approx 55 and 56m so the ground can be reached in two raps with 2x60m ropes (see notes below for options with shorter ropes).

First rap is two SS Petzl rings located a small scramble down from near the top of Travellers Slab.

Head down and slightly left to reach the ledges, go over these and down the face about 8m further to two more rings at a small but comfortable stance.

From here, the second rap heads slightly right down the face (near Route Two) to the bottom.

Options: If you have 1x60m and 1x50m ropes, you might be able to reach the midstation by equalising the ropes as best you can. Otherwise, stop on a small stance on the face and downclimb the easy but exposed face (or belay to be safer). Don't forget to tie stopper knots in the ends of your ropes. You can reach easy-angled slabs at the base with this rope combination and scramble down the last 2-3m of low-angle slabs.

If you only have 2x50m ropes you might still consider using the rap descent. Rap down to the ledges then belay or scramble down to the rings. For the second rap, head straight down the face over roofs (watch for sharp edges) to end up reaching a stance higher up in the gully, then bash down the last few metres.

Caveat: the short-rope options have not been tested. Abseiling can lead to injury or death, take suitable precautions. 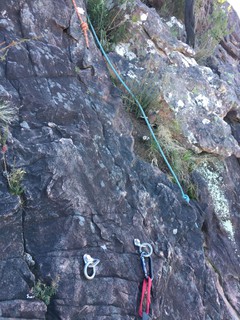 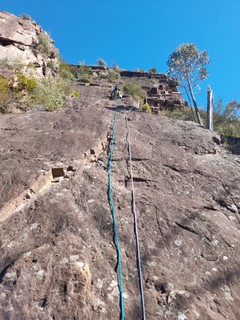 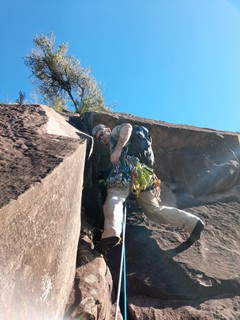 Check out what is happening in North Jawbone.