Over The Hill Mostly Sport climbing 24 routes in crag

The routes are moderate, well bolted, sport climbs with hardly any smearing. A handful of quick draws is all you need for a great day out. A couple of routes need some natural gear and a stiff brush might also be handy for some of the routes near Big Man’s Rump, especially if they haven’t been climbed in a while.

The cliff faces west and is very pleasant in spring and autumn. After rain, in the cooler months, the cliff is best avoided because it is not quick drying.

Echidnas, wallabies and Alcoa blasting teams can be seen by the soft footed. The crag has over 20 routes, mostly fully bolted. They are all reasonably good, long and sustained for Perth slab routes.

Don’t let the word slab put you off. There is not much smearing, and maybe the routes are better described as off vertical face climbing on small holds. The rock is very featured with crimps, pegmatite crystals and grippy granite nubbins. It is great rock to climb on.

The crag was originally found by Derek Shaw and Chris Swain in the late 1990’s. An attempt on the Full Monty version of Big Man’s Rump (crack) was made. Since then it has lain dormant until the spring of 2014…..

Drive approximately 46 km along Albany Highway from the traffic light intersection in Armadale. The Cooke Pine plantation is on the left (eastern side) of Albany Highway. Turn left into a gravel track (at the ‘Water’ sign) about 50 metres beyond the southern end of the Cooke Pine Plantation. There is an area to park behind a stand of Marri trees 50-100m down the track. Here your car will not be visible from the road. If you get to the power lines crossing Albany Highway you have gone too far.

30mins walk from the car to the crag / picnic rock. From where you have parked the car, walk back up the track and cross Albany highway. Follow another gravel track (blocked by logs) through to an old gravel pit. Follow the track through the old gravel pit which is populated by many young banksia trees. At the end of the gravel pit go through 100m of bush and cross an old road, then head through the bush again aiming for a rocky slope. Cross the creek and zig-zag up the rocky slope (hill). Go through the bush to the top. Follow cairns and pink marker tap. From the top descend through patches of open scrub and granite until the top of the slabs are reached. Descend the gentle slabs, aiming for their north end where you should find a large flat rock wedged against some trees. This is the picnic rock and a great spot to leave your pack and watch other climbers. The crag is divided into three climbing areas: 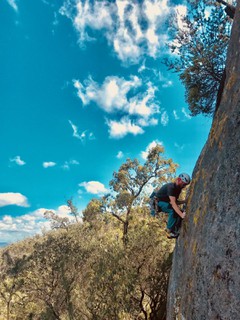 Check out what is happening in Over The Hill.