Please note that we use cookies to improve the use of this website. By continuing to browse the site, you accept theCrag Site Usage Policy I Agree
Australia
New South Wales and ACTNSW & ACT
Southern Tablelands
Wingello

Wingello has a good variety of climbing combined with fairly easy access and camping which make for a fantastic weekend away. If a day trip is more to your liking, Wingello is only an hour down the freeway from Liverpool in South Western Sydney. So it is well within the 2 hour day trip limit.

The crag is located in a great location over looking beautiful bushland about 20 minutes out of Wingello. The best coffee in Wingello is served at the Wingello Village store, which is located just over the railway tracks in the down town metropolis. They also sell pies, bread and basic lunch supplies. Open seven days. They open early on weekdays, but 8am on Saturdays. The walls of Supa Fun Happy and La Paz have some fantastic climbing with amazing almost Grampians like sandstone. Supa Fun Happy is a good wall to start at with a good mix of grades.

Sydney climbing has a detailed guide of the Gulp Rd area at http://www.sydneyclimbing.com/confluence/download/attachments/5406966/Wingello+Climbing+Guide.pdf?version=2&modificationDate=1302047466000

In 2013 National Parks erected a locked gate 200m from the fire fighters memorial and placed several very large boulders on the road at the entrance of the memorial. Park in the designated car park to avoid blocking the gate or being blocked in by other users.

From Sydney: Wingello is about 1 hour from the M7/M5 intersection and the crag itself is about 20 minutes out of Wingello (depending on your car). Wingello is best reached (from Sydney) by busting straight down the Hume Hwy to the turn off just after the Paddy’s River bridge. You can also go through Bundanoon but its probably a bit slower. From Macca’s on the Freeway its 11.5km to the Wingello turn off, and another 8km from there to the Wingello Railway Crossing. Reset your speedo on the railway line or at the shop . 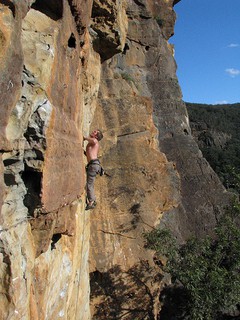 shaunm on ★★ The Sweet Escape 26 - Captain Amerika in cruise control - this climb never stood a chance! 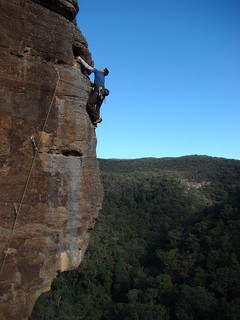 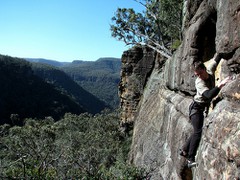 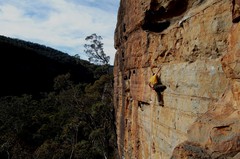 Check out what is happening in Wingello.