The climbing area Bürs is located in the lowest part of the Brandner valey, which is drained by the Alvier creek. In its lowest reaches the valey contains very interesting type of rock, the Bürser Konglomerat (conglomerate of Bürs). Carbonate rocks occur on the left flank of the valey near the exit, where you find the sectors "Steinbruch" and "Bürser Platte". The sectors "Bürser Verschneidung", "Große Wand", "Großer Überhang" and "Rumpelkammer" are situated in the Bürser conglomerate. Climbers which are not frequently climbing on conglomerate will need to get used to it. The rock structure changes in the different geological packages and you can have very often sections with crimps and holes with sharp edges as well as slopers and slopy holes, but also buckets and pockets of various size. The cement is fairly stable and the rock in the routes is in general of a good quality. Due to different erosion of the different packages the steepness changes from overhung through vertical to ramp. For the same reason some routes could be also "sandy". In many potential holds you find some spider-like creatures, probably harvestmen (daddy longlegs, opiliones). They are very peaceful and not dangerous. Just watch for them and try not to hurt them

The Alvier gorge (Bürser Schlucht) is worth hiking. There is a nice path from the crag up to the village Bürserberg. Nice approach if you are staying at Heidi's campsite

At hot days one could cool down in the Alvier creek

Conglomerate is a sedimentary rock formed from rounded clasts cemented together in a matrix. The rounded shape of the clasts indicates that they have been transported some distance from their original source, for example by a river or glacier. The cement that binds the clasts could be composed of calcite or silica for example. The Bürser Konglomerat is a fluviatile succession up to about 140 m thick. It is underlain by a lodgement till with striated clasts of metamorphic rocks (the age of that basal till is not known). Today, the Bürser Konglomerat is incised by a gorge of the Alvier. In its lower part, the succession of the Bürser Konglomerat consists of mainly subhorizontally-bedded coarse-grained gravelly to cobbly conglomerates dominated by very well- to well-rounded clasts. The clasts mainly are middle to upper Triassic neritic carbonate rocks derived from the Northern Calcareous Alps in the drainage area of the Alvier creak. Clasts of lower Triassic siliciclastics (Alpiner Buntsandstein), of Jurassic deep-water limestones (Adnet Group), and of metamorphic rocks are subordinate in abundance (Ostermann et al., 2006 and references therein). The metamorphic rocks clasts within the Bürser Konglomerat probably are derived from erosion of the older lodgement till below the conglomerate succession. Internally, the Bürser Konglomerat is arranged in indistinct, roughly symmetrical upward-coarsening to upward-fining packages that are vertically separated by thin intervals of arenite; the cyclic packages, however, locally are truncated and incomplete. There are different controversial hypothesis in the geological literature regarding the accumulation history of the Bürser Konglomerat. A relatively recent thorium-uranium dating by Ostermann et al. (2006) of calcite cements yielded a probable cementation age of 128 ± 10 ka for the Bürser Konglomerat. This suggests that the succession accumulated during the Riss Glacial, as a result of blocking of the fluvially-shaped (V-shaped) lower reaches of the tributary valley during advance of the Ill glacier along the trunk valley. Ostermann et al. (2006) suggest that the age-dated calcite cements of the investigated conglomerates precipitated during termination of the Riss glacial to the earliest Eemian. The precipitation of cements most probably took place during deglaciation, when the tributary valleys still were blocked by ice, or dead ice, in the trunk valley. Cement precipitation during early deglaciation may have been favoured by exposure of large areas of glacial till, leading to meteoric groundwaters of relatively high content in dissolved calcium carbonate. Near the exit of the valley, the Bürser Konglomerat onlaps a vertical cliff of middle Triassic carbonate rocks that represented the left flank of a bedrock gorge.

Regarding 'Steinbruch' and 'Bürser Platte' :

The nearest parking space for the sectors in the gorge is at the beginning of it. You can find many other parking spaces nearby if this one should be occupied. 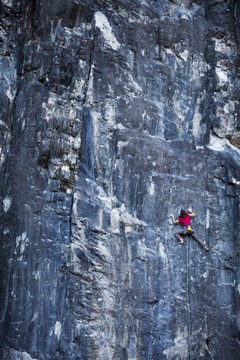 Verena on ★★ Liquid Spirit 6a+ 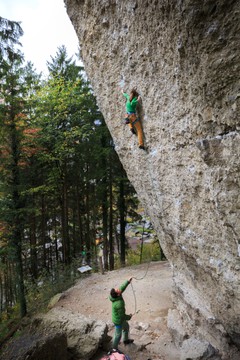 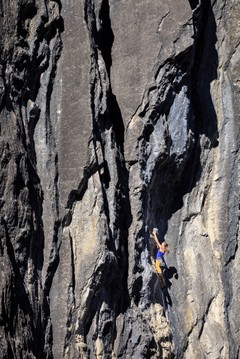 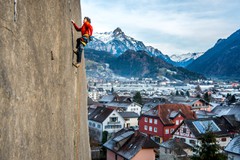 Check out what is happening in Bürs.