At 90m, the tallest cliff in Southern Ontario.

Bon Echo climbing is actually on a cliff called "Mazinaw Rock" in the Bon Echo provincial park. This is a 2km long granite cliff rising out of Mazinaw lake up to a height of 90m or so. Climbs are generally accessed from the water, so a boat is usually needed.

The Alpine Club of Canada (ACC) - Toronto section maintains a hut and camping area near the climbing and a boat for access to the camping and cliff.

As of Spring 2014, the ACC has a web page describing the hut and climbing at: http://alpineclubtoronto.ca/bonecho/ .

A guide book is (currently as of May 2013) available in PDF at: http://alpineclubtoronto.ca/bonecho/guidebook.html

Grades at Bon Echo are generally "old school" since most routes were put up (and graded) before 1990. Due to the nature of the cliff, even low-graded routes often have impressive exposure. Gear can often be tricky to find, or suspect -- most climbs should be considered PG at best, unless otherwise labelled.

Climbing has been reinstated.

The cliff is in a provincial park, and permission to climb is granted based on a Memorandum of Understanding between the ACC and the park.

The Alpine Club of Canada, Toronto Section and Bon Echo Provincial Park have a Memorandum of Understanding that allows us the privilege to climb inside the limits of the Provincial Park. Please follow these rules at all times. Be mindful that the misconduct of just one person can jeopardize our relationship with the park and our ability to climb in this beautiful place. 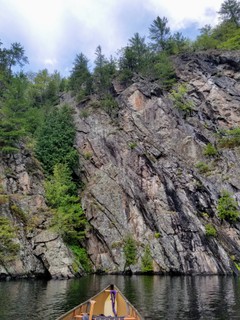 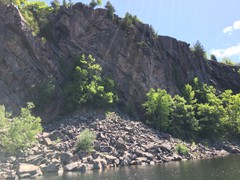 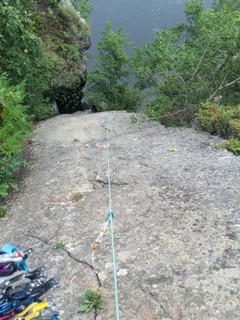 Gavin Smith on ★★★ Formication & Mac's Book 5.6 - Formication, from the anchors

Check out what is happening in Bon Echo.